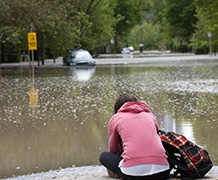 Climate change stories that are framed as ‘Disaster’ (like floods) are more likely to make it onto TV news. But these sorts of images make people less empowered to take action on climate change. Image courtesy Shutterstock.com.

A difficult climate: New study examines the media’s response to the IPCC

The UN Intergovernmental Panel on Climate Change (IPCC) periodically releases Assessment Reports in order to inform policymakers and the public about the latest scientific evidence on climate change. The publication of each report is a key event in the debate about climate change, but their reception and coverage in the media has varied widely.

A study, published today in the journal Nature Climate Change, has for the first time analysed how Twitter, TV and newspapers reported the IPCC’s climate evidence. Understanding how media coverage varies is important because people’s knowledge and opinions on climate change are influenced by how the media reports on the issue.

The study found that there were markedly different ways in which the media portrayed the IPCC’s latest findings. The researchers investigated this through studying the frames (ways of depicting an issue) the different media sources used to emphasise some aspects of climate change, whilst downplaying others. They also found large differences in how much coverage each Working Group received (the IPCC has three, which focus on the physical science, impacts and adaptation, and mitigation respectively).

The researchers, from Geography, Biosciences and Psychology at the University of Exeter and the University of Colorado-Boulder in the USA, found ten different frames used to communicate climate change: Settled Science, Political or Ideological Struggle, Role of Science, Uncertain Science, Disaster, Security, Morality and Ethics, Opportunity, Economics and Health. The first five frames were used to communicate the IPCC reports much more frequently – whereas the latter frames were not used much at all.

Dr Saffron O’Neill, lead author of the study from Geography at the University of Exeter, said: “We know that some of these frames are more engaging for audiences than others: for example, the Opportunity or Health frames are both effective at linking the distant issue of climate change to peoples’ everyday life. But these kinds of frames are little used in newspaper coverage, on TV, or on Twitter.”

The study suggests that the availability of visual content and accessible storylines played a big part in how IPCC science was reported by the media. The authors argue that these findings need to inform how future IPCC Assessment Reports are communicated, in order that policymakers and the public are better informed.

Dr Tim Kurz, a social psychologist on the project team, said: “Now that we’ve been able to map the frames that media outlets use to report upon the IPCC, the next step in our research is to experimentally examine the psychological impacts that these different media frames have on media consumers”.

The study is part of a Focus Issue in Nature Climate Change titled ‘IPCC and Media Coverage of Climate Reports’, coordinated by Dr O’Neill. The Issue includes a commentary on social media and the IPCC by the journalist Leo Hickman; a study examining how risk language might help communicate climate change by media expert Dr James Painter; and a proposal for radically reworking the Summaries for Policymakers to increase understanding, by climate and energy commentator Richard Black.

The study was funded through an ESRC Future Research Leader Award to Dr O’Neill, and through the University of Exeter Humanities and Social Sciences Strategic Fund.