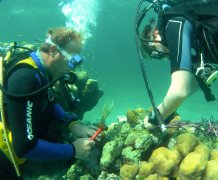 The study focused on populations of the Mountain Star coral, Orbicella annularis, in the Caribbean.

Algae aid corals in their fight against climate change

Corals may be better equipped to tolerate climate change than previously believed, according to research led by the University of Exeter.

The study, published in the journal Coral Reefs, focused on populations of the Mountain Star coral, Orbicella annularis, a widespread and prominent reef species in the Caribbean.

Using a high-resolution molecular screening technique known as Real Time-PCR, the researchers found that the partnership between a temperature-resistant alga and the reef-building Mountain Star coral is more common than previously thought.

Lead author Dr Emma Kennedy, now at Griffith University in Australia said: “Corals rely on a relationship with algae in order to get energy via photosynthesis.

“However, under stressful conditions such as increased temperatures, this relationship can be disrupted, resulting in loss of the algae in an event known as bleaching. In an extreme event, this can lead to coral death.

“Understanding its ability to weather the pressures of a changing climate, in particular rising sea temperatures, is a key question for conservationists.”

The alga Symbiodinium D – known to be associated with resistance to coral bleaching - was found in low abundances at almost every location the researchers tested, from Tobago to the Bahamas. As well as being geographically widespread it was found on average in more than 30 per cent of the corals in each location.

Dr Jamie Stevens from Biosciences at the University of Exeter said: “Previous studies have shown that if Orbicella annularis contains just a small amount of Symbiodinium D it can sometimes respond better to stress events — such as heatwaves — and is more likely to avoid coral bleaching. In the future, it will be fascinating to see how widely distributed is the particular Symbiodinium type that we have studied in Orbicella in the Caribbean.”