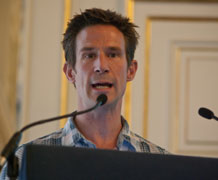 Baby fish will be lost at sea in acidified oceans

The ability of baby fish to find a home, or other safe haven, to grow into adulthood will be severely impacted under predicted ocean acidification, academics have found.

Published today in the journal Proceedings of the Royal Society B, the international team, which included a researcher from the University of Exeter, report the interpretation of normal ocean sound cues which help baby fish find an appropriate home is completely confused under the levels of CO2 predicted to be found in oceans by the end of the century.

Research team member Dr Stephen Simpson, from the University of Exeter, said there would be a profound impact on fish populations and the industries they support if CO2 continues to rise at current rates. Nations have the capacity to prevent severe impact if CO2 emissions are reduced.

Dr Simpson, Senior Lecturer in Marine Biology and Global Change, said: “Our study demonstrates that high levels of CO2 predicted for the end of the century could affect the ability of young barramundi, a commercially important fish in Australia, to detect and locate essential nursery habitat. CO2-driven ocean acidification is likely to damage fish populations and marine ecosystems around the world, highlighting the importance of keeping to the recent COP21 agreement signed in Paris last weekend.”

They conducted experiments with barramundi hatchlings, an important fisheries species and found high CO2 makes baby fish move slower and show more hiding behaviour compared to normal fish. This could make it more difficult for them to find food or habitat and to avoid predators.

Marine researchers know that ocean acidification can change fish behaviours. But until now it hasn’t been known how high CO2 would affect such crucial hearing behaviour as finding somewhere to settle.

Research leader, Associate Professor Ivan Nagelkerken, from the University of Adelaide, said: “Such misinterpretation of sound cues and changes in other behaviours could severely impact fish populations, with the number of young fish finding safe habitats dramatically reduced through their increased vulnerability to predators and reduced ability to find food.”

Tullio Rossi, PhD candidate with the University of Adelaide’s Environment Institute, said: “Locating appropriate homes is a crucial step in the life cycle of fish. After hatching in the open ocean, baby fish travel to reefs or mangroves as safe havens to feed and grow into adults.

“Baby fish can find those places through ocean noise: snapping shrimps and other creatures produce sounds that the baby fish follow.

“But when ocean acidity increases due to increased CO2, the neurological pathways in their brain are affected and, instead of heading towards those sounds, they turn tail and swim away.”

A YouTube video further explaining the research can be viewed here.