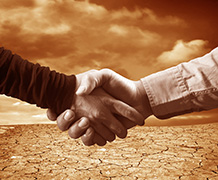 Successful environmental conservation needs to focus on the negotiation process, not just the end target. Image courtesy of Shutterstock.

Being smart about SMART environmental targets

The study, which is published in the journal Science, provides strategies for scientists to facilitate more effective international negotiations to influence long-term government and business development priorities.

Dr Ana Nuno from Biosciences at the University of Exeter’s Penryn Campus in Cornwall said: "There are a number of tools from the social sciences that can be used to improve negotiations, requiring greater interdisciplinarity for effective international agreements for conservation and sustainability."

“SMART targets are specific, measurable, ambitious, realistic, and time-bound, and have the advantage of holding signatories to account by determining whether targets have been met,” he said.

“They have proven effective, for example, in guiding the successful phase-out of ozone layer- depleting chlorofluorocarbons (CFCs) under the Montreal Protocol.

“However, it is difficult to set and meet SMART targets when signatories dispute the social and environmental benefits of reaching a target.

“To develop achievable and environmentally relevant targets on contentious issues, scientists need to adopt tools such as game theory, management strategy evaluation and collaborative learning techniques, which can help to overcome negotiation roadblocks.”

“Scientists can do so much more than just provide information to policy-makers" she said.

"Agreeing on science-based targets also requires scientists to take responsibility for ensuring that information is understood and constructively used.