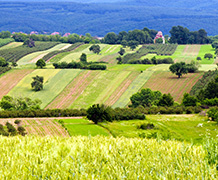 Use of land for agricultural production has come at a cost to local ecosystems - the worst-affected areas have lost one in three of their species.

Humanity’s use of land for agricultural production has come at a cost to local ecosystems worldwide, but some of the damage can be reversed, according to a major collaborative research project from the Natural History Museum, United Nations Environment Programme World Conservation Monitoring Centre (UNEP-WCMC), and British universities.

A global network of contributors has submitted data from every continent, providing the most complete picture yet of the effects of land-use by humans. The team of scientists assessed changes in biodiversity from 1500 until the present day. Over 280 publications have been consulted, with 26,593 species considered by researchers.

The study, published in the journal Nature, revealed that by 2005 land-use change had caused a decrease of 13.6% in the average number of species found in local ecosystems, compared to the pre-industrial era. Most of the loss has come in the last 100 years.

The team concluded that, if human impacts continue to grow as they have been, future losses in biodiversity will be concentrated in biodiverse but economically poor countries.

Julie Day from the University of Exeter – formerly at Imperial College London and now a PhD student in Biosciences - said: “We are living in an era of large human impact on the environment. It is really important to understand how these two relate so we can safeguard biodiversity. This new research highlights that the future of biodiversity is not set in stone but we must act now if we want a more positive outcome.”

Achim Steiner, UN Under-Secretary-General and Executive Director of the UN Environment Programme (UNEP) said: “As our understanding of the human impact on ecosystems and the escalating loss of species grows so must our willingness to change course.  The adoption of robust policy frameworks that support the emergence of effective carbon markets and land-use practices for the preservation of natural habitats are but one example of the opportunities we must seize.”

Lead author of the study, Tim Newbold of UNEP’s World Conservation Monitoring Centre, said: “The worst-case scenario we have mapped would have a severe impact upon most regions of the planet. Our models predict that rapid agricultural expansion, particularly in poorer countries, will cause rapid further losses of biodiversity. However, other scenarios give a much more positive outcome for biodiversity, especially for poorer countries.”

Researchers found that the worst-affected areas had lost one in three of their species, enough to substantially impact the functioning of those environments.

Lead scientist, Andy Purvis of London’s Natural History Museum, said: “These findings are a significant milestone in understanding our impact on the planet. They show that what happens next is completely down to us. If we carry on as we are, numbers of species will fall by nearly 3.4% on average by 2100. But if society takes concerted action, and reduces climate change by valuing forests properly, then by the end of the century we can undo the last 50 years of damage to biodiversity on land.”