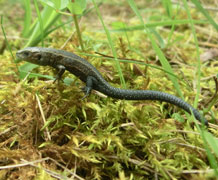 'Breed fast and die young' is the new mantra of common lizards in the face of climate change.

A new study, published in the journal PLOS Biology, has demonstrated that lizards do not cope well with the climate predicted for the year 2100.

While there is no doubt that climate change is affecting many organisms, some species may be more sensitive than others – particularly reptiles, whose body temperature depends directly on environmental temperature.

Scientists from the Station d'écologie expérimentale du CNRS à Moulis and the Laboratoire Evolution et Diversité Biologique examined the consequences of a 2°C warmer climate on the persistence of populations of common lizards, Zootoca vivipara, a widespread European reptile. Their results show that many common lizard populations could disappear rapidly as a consequence of such warmer temperatures.

‘Breed fast and die young’ seems to be the new mantra of common lizards in the face of climate change.

Dr Elvire Bestion, co-lead author of the study, currently working at the Environment and Sustainability Institute at the University of Exeter's Penryn Campus said: "While a two-degrees warmer climate might seem beneficial at first, as it leads to faster growth of juvenile lizards and earlier access to reproduction, it also leads to lower survival in adult individuals, which should endanger population survival."

A model of population dynamics showed that the increased adult mortality would lead to decreased population growth rates, and ultimately to rapid population extinctions in around 20 years.

The team used the Metatron - a system of semi-natural enclosures in which temperature can be manipulated - to create two distinct climates: one similar to the present climate and another 2 °C warmer, corresponding to the predicted climate for the end of the century.

Eighteen populations of common lizards were put into Metatron enclosures over two years in the ‘present’ or ‘warmed’ climate. Populations were surveyed for one year, allowing the team to determine the impact of warmer climates on demographic parameters such as growth rate, reproduction and survival.

Dr Julien Cote, biologist at the Laboratoire Evolution et Diversité Biologique in France, and co-lead author of the study said: “Although these results might seem dramatic, we do not predict extinction of common lizards at the scale of the species, but we suggest that populations at the southern edge of their range of distribution might particularly suffer from warmer climates."

"Anecdotally, we also showed that warmer climates led some adult females to engage into a second reproduction event during the summer, while these lizards normally reproduce only once a year during the spring. Combined with the earlier juvenile reproduction and the higher adult survival, these results suggest a shift of demographic strategy from a relatively long life and low reproductive output to a faster life, higher reproductive investment. We can wonder whether this strategy shift may help adaptation of populations to warmer climates over time." concluded Elvire Bestion, adding a positive note to overall pessimistic results.