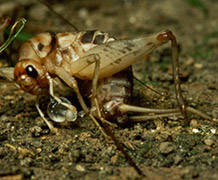 Edible gifts given by male crickets to their female partners during mating contain unique proteins which could affect the females’ behaviour according to research from the University of Exeter and Max Planck Institute for Chemical Ecology, published today in the journal PLOS ONE.

Many insects mate by transferring their sperm in a capsule, or ampulla. In decorated crickets, Gryllodes sigillatus, an additional edible present, known as a nuptial gift, is offered to the female during mating in the form of a large gelatinous ball of protein attached to the ampulla which the female eats while the sperm are being transferred.

The scientists believe that some of the proteins contained in the nuptial gift prevent digestive enzymes in the female’s gut from breaking down other active proteins in the gift. These protected proteins may then alter her reproductive physiology and make her less likely to mate with further males.

Professor Richard Ffrench-Constant from the Centre for Ecology and Conservation at the University of Exeter's Penryn Campus said: “It has long been thought that the purpose of the edible love gift was so that male crickets could be sure their sperm wouldn’t be eaten by the female. However our study suggests that the story may actually be more complex and that the gift not only functions to feed the female but it may also affect her behaviour.”

“It's a bit like the old cliché of offering a box of chocolates to oil the wheels of courtship – in this case  on the understanding that the crickets’ sperm will be met by a receptive reproductive system.”

The researchers analysed the proteins contained in the nuptial gift to determine their molecular structure and function. They found that not only are some of the proteins protected from being broken down by enzymes, but they bear a striking resemblance to growth factor proteins known to exist in other insects. This similarity suggests that the proteins could promote cell growth and development in target tissue within the female’s body and as a result influence female reproductive behaviour.

There is a direct correlation between the time needed for a female to consume the nuptial gift and the time required for complete transfer of sperm from the ampulla to the female’s sperm storage organ. The larger the gift, the longer the ampulla attachment time and so the greater the male’s chance of paternity.

Future research will investigate the exact role that the proteins in the nuptial gift may play in altering the reproductive physiology of the female decorated cricket. More work is needed to determine whether the nutritional composition of the gift could make her less receptive to further matings or could in some way ensure that fertilisation occurs.

What’s in the Gift? Towards a Molecular Dissection of Nuptial Feeding in a Cricket is published in PLOS ONE.