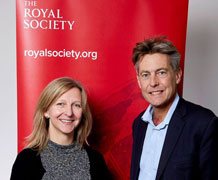 Professor Tamara Galloway from the University of Exeter swapped her lab coat for legislation last week when she visited Exeter MP Ben Bradshaw at the House of Commons for a week in Westminster. The week was part of a unique pairing scheme run by the Royal Society - the UK’s national academy of science, with support from the Government Office for Science.

During her visit Professor Galloway shadowed Mr Bradshaw and learned about his work. As well as attending panel discussions about how evidence is used in policy making, while in Westminster Professor Galloway attended a Select Committee and was in the Commons to hear the results of the Chancellors’ Comprehensive Spending review.

The week began with a reception in parliament where Jo Johnson MP, Minister for Science and Universities spoke about the value of UK research and the important role of scientific advice in parliament. Nicola Blackwood MP, Chair of the Science and Technology Select Committee spoke about the Committee’s plans to investigate the evidence underpinning Government policies.

Tamara, who is Professor of Ecotoxicology in Biosciences said: "This was a fantastic experience and it was such a compelling week to be witnessing how government works, with the release of the Chancellor’s Comprehensive Spending Review and ongoing world events. I felt privileged to be there to see such important events taking place."

The visit provided Professor Galloway with a behind the scenes insight into how policy is formed and how her research on environmental pollution can be used to make evidence based decisions to protect our environment. It also gave Mr Bradshaw the opportunity to investigate the science behind his decisions and improve government access to scientific evidence.

Ben Bradshaw will get hands on experience of Professor Galloway’s research on marine pollution and human health when he dons a lab coat and visits the University of Exeter next year.

Ben Bradshaw said: “This is my third pairing scheme with the University of Exeter, and it’s fascinating to explore different areas of world-leading research carried out in the city. My approach to politics is very much evidence-based, and this scheme allows me to explore that further too.”

The Royal Society’s pairing scheme, which started in 2001, aims to build bridges between parliamentarians and some of the best scientists in the UK.

Dr Julie Maxton, Executive Director of the Royal Society said: “Our world faces challenges that can only be addressed with a solid understanding of science. From climate change mitigation and adaptation to GM regulation, policy makers must make decisions about issues which will affect the lives of all those in the UK, and often, the global community. We must rely on them to make sound decisions based on the best available evidence when tackling these complex issues.

Scientists and policy makers have a responsibility to engage with each other to get the best possible scientific advice into public policy making. The Royal Society’s pairing scheme, now in its 15th year, provides an opportunity for MPs and scientists to build long term relationships to make the best evidence and scientific advice increasingly accessible. The shaping of public policy can only improve over time as these relationships continue to grow.”