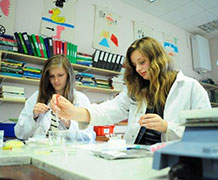 Students, Eilish Hart and Jasmine Howard, from Thomas Hardye School in Dorchester working in the lab with DNA from different plants to see how closely related they are.

Academics and undergraduates from the University of Exeter are set to work with school pupils from Thomas Hardye School in Dorchester on a new study to explore the distribution of Lyme disease in the region.

Local vets and wildlife trusts are being asked to collect animal ticks for the school pupils who will use the latest laboratory techniques to reveal the ticks’ genetic fingerprints.

The results will be used to map the distribution of ticks in Dorset and investigate their role in the spread of Lyme disease.

Blood-sucking ticks have resulted in a recent rise in Lyme disease in humans, with 2,000-3,000 new cases estimated in England and Wales each year. Lyme disease can often be treated effectively if it is detected early but if treatment is delayed there is a risk of long-lasting neurological problems and chronic pain.

Ticks carrying Borrelia Spirochaetes - the bacteria that cause Lyme disease - are thought to be widely distributed in Dorset. The project will investigate the distribution of Borrelia DNA within Dorset ticks, and aims to correlate the occurrence of Borrelia with specific types of tick.

The project will investigate the epidemiology of Borrelia Spirochaetes and is funded by a Royal Society Partnership Grant, led by Simon Lewis – a biology teacher at Thomas Hardye School. The prestigious scheme offers school students the opportunity to get involved in real life current research and engage with discussions in the local community.

Dr Nicola King, Senior Lecturer in Biosciences from the University of Exeter said: “This is an exciting project which uniquely will allow school pupils to work alongside final year undergraduate project students and academics, doing research in a field which is currently of great interest across the academic community. Not only will it allow pupils to take part in research but will also give our students an opportunity to work with a local school and develop their own research and science communication skills”.

Andrew Ellison, Head of Science for Thomas Hardye School said: “The Royal Society Partnership Grant will benefit both current and future students at the Thomas Hardye School in numerous ways. It will allow them to take part in cutting edge research, give them access to excellent resources and hopefully benefit society with their findings.”

The project will also involve three undergraduate final year project students from the University of Exeter, who will work with the school and scientists at the University as part of the scheme.

Students at Thomas Hardye School will be introduced to modern genetic laboratory techniques and will have the opportunity to engage with professional scientists, gaining an insight into current research techniques and its relevance for modern society. The equipment and skills training provided by this scheme can be used in future genetic based projects and teaching within Thomas Hardye School.