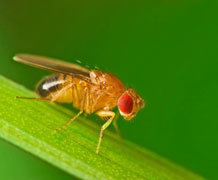 Females have more sexual partners when they live in colder climates and are happier being monogamous when it is hotter, a study into the behaviour of insects has found.

Researchers at the University of Exeter also found that some female fruit flies are genetically programmed to have a large number of mates and will do so whatever the weather, while others will consistently stick to one mate.

The findings, published in the journal Behavioral Ecology, show that while the environment and temperature does have some influence, sexual behaviour is largely determined by an individual’s genes.

“This is a textbook example of the role of genes versus environment. Sexual behaviour is really hardwired into females. It makes sense biologically for females to have a number of partners as they will produce more offspring that are more genetically diverse and survive better,” said Dr Michelle Taylor, from the Centre for Ecology and Conservation, lead researcher on the study.

“What is interesting, and what needs further research, is the question of why some females stay with one partner. We don’t know what maintains monogamy.”

The fruit flies are not alone in their behaviour. Previous research has shown that there are both monogamous and promiscuous females in all sorts of species including birds, reptiles and fish.

In this study into behaviour, reproduction and temperature, the researchers collected wild fruit flies from the hot climate of Arizona and cold climes of Montana in North America and observed their behaviour in a laboratory at the University of Exeter’s Penryn Campus in Cornwall.

They preserved a ‘snapshot’ of the genes available in the population by inbreeding flies for over 40 generations and then examined how many male partners each inbred female would accept when living at temperatures that were either warmer or cooler than their natural habitat.

By exposing preserved ‘genotypes’ to different temperatures in this way, the researchers identified the influences of genes versus environment (temperature) on the mating habits of female flies. In this case, more females accepted more partners when living in colder conditions, while more remained monogamous in hotter conditions.

However, some females were always more likely to have more male partners than others even when living at conditions very different to their original habitat, demonstrating that although temperature can encourage females to change their behaviour, ultimately the genetic background of each female remains the most important factor when predicting how many male partners a female will have in her life.

“These results are an important step towards understanding how genes and environment contribute towards behaviour and ultimately how behaviour affects the success or failure of natural populations,” added Dr Taylor.

“Mating with many different males can change the genetic make-up of a population because it increases the number of combinations of genes represented in each generation. Evolutionarily speaking, this could be one reason why some populations are able to adapt to changing environments while others go extinct.”

The study was supported by the Natural Environment Research Council (NERC).

Temperature can shape a cline in polyandry, but only genetic variation can sustain it overtime by Michelle Taylor, Tom Price, Alison Skeats, and Nina Wedell is published in Behavioral Ecology.