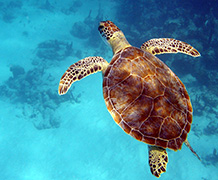 Fishermen in the Turks and Caicos Islands could be increasing the local prevalence of a disease that is affecting turtle populations worldwide, by selectively harvesting healthy creatures and throwing back infected animals.

Research led by the University of Exeter surveyed green turtles in the Caribbean waters around the Turks and Caicos Islands (a UK Overseas Territory). The country regulates a small, legal fishery for the globally endangered species.

The research is published today in the journal Frontiers in Marine Science and supported by the Marine Conservation Society, the Natural Environment Research Council (NERC) in the UK and the Department of Environment and Maritime Affairs (DEMA) in the Turks and Caicos Islands. The team surveyed cases of green turtle fibropapillomatosis disease, which creates unsightly pink tumours on the turtles’ flesh. Although benign, they can impede turtles’ vision and movement, as well as feeding, swimming and organ function. The virus is not thought to be dangerous to humans.

Over two years, around 13 per cent of green turtles found in waters had the disease. In contrast, fishermen did not land any diseased turtles during this period, even though they were fishing in areas where diseased animals were prevalent.

Dr Tom Stringell, from the University of Exeter’s Centre for Ecology and Conservation, on the Penryn Campus, said: “Most of the fishermen we spoke to said they had caught diseased turtles, but they told us that they didn’t want to eat turtles with tumours, so they threw them back. We know a lot about the consequences of culling diseased creatures to take them out of the general population, and this practice has the opposite effect, effectively increasing the proportion of diseased animals in the population.”

Dr Annette Broderick, from the University of Exeter’s Centre for Ecology and Conservation, on the Penryn Campus, said: “Although green turtles are classified as globally endangered, as a result of centuries of over harvesting, many populations are now recovering and eating turtles may well become more common in the future. Monitoring this disease is therefore important for both wildlife conservation and future issues relating to food and human health.”

Dr Peter Richardson, Biodiversity and Fisheries Programme Manager of the Marine Conservation Society said “Our study suggests that fishers’ choice may have local impacts on their target species. However, the large Caribbean green turtle nesting populations that contribute to the stock of young turtles in Turks and Caicos Islands waters are increasing. This well-regulated fishery is relatively small compared to other turtle fisheries in the region, so the impact of the fishery on Caribbean green turtle populations is likely to be negligible.”