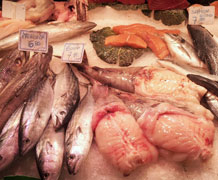 It is thought that more transparent seafood supply chains can lead to more sustainable exploitation and healthier oceans.

Tough new policies to combat fish fraud across Europe appear to be working, according to a new study.

The largest multi-species survey of fish labelling accuracy to date indicates a marked and sudden reduction of seafood mislabelling in supermarkets, markets and fishmongers in the EU.

Scientists in six European countries, including Dr Andrew Griffiths from the University of Exeter, tracked samples of the most commonly consumed fish, including cod, tuna, hake and plaice, after a series of studies going back 5 years had shown mislabelling in up to 40% of cases.

It is thought that more transparent seafood supply chains can lead to more sustainable exploitation and healthier oceans. The study is part of the LABELFISH project, supported by the EU Atlantic Area Programme and the Department for Environment, Food and Rural Affairs.

Dr Griffiths, a lecturer in Biological Science and part of Exeter’s Biosciences department, is a key author of the new study, which is published in leading scientific journal Frontiers in Ecology & The Environment.

Dr Griffiths said: “I am very pleased with these results as they show that consumers can have more confidence in the accuracy of seafood labelling. They are also surprising as previous investigations detected much higher levels of mislabelling, it highlights just how seriously this problem is being addressed within the EU.”

The international collaboration carried out genetic testing of seafood sold in supermarkets, traditional markets and fishmongers in 19 European cities between 2013 and 2014, including Cardiff, Glasgow, Plymouth and Manchester, Dublin, Madrid, Marseille, Lisbon and Hamburg.

Most commonly mislabelled was anchovy (15.5%), hake (11.1%) and tuna (6.8%). By contrast only 3.5% of cod and 3% of haddock was mislabelled. None of the monkfish, plaice or swordfish samples was substituted with other species.

The study found little or no difference in tinned, fresh or frozen products and no significant country-associated trends.

The study argues that the trend is due to a combination of transnational legislation, governance and public outreach, which has forced new regulation and self-regulation, and it contrasts the European ‘turn-around’ with the experience of the United States, where improvements appear more sluggish.

Principal Investigator Stefano Mariani, professor of conservation genetics at the University of Salford, said that much remains to be investigated about the complexities of global seafood supply.

He said: “Genetic identification methods have progressively exposed the inadequacies of the seafood supply chain, raising awareness among the public, and serving as a warning to industry that malpractice will be detected.

“This evidence indicates we are now on the road to greater transparency, which should help the management of exploited stocks worldwide, but further standardised studies on a greater range of food provision channels, such as restaurants and auctions, are warranted, in order to have a complete understanding of the current state of the trade”.