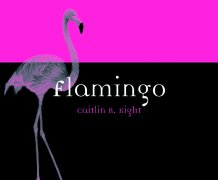 The cover of Flamingo, the latest addition to Reaktion Books' Animal Series.

Flamboyance of the flamingo explored in new book

They are among the most iconic and easily-recognisable animals anywhere in the world, and play a striking role in both art and popular culture throughout the ages. Now, the elegant and captivating flamingo is the subject of a fascinating new book, authored by a leading expert from the University of Exeter.

Dr Caitlin Kight, who is based at the University’s Penryn Campus, offers an absorbing voyage of discovery into the natural and cultural history of the flamingo, including its behaviour, habitats and rich symbolism in cultures across the globe.

The book, called Flamingo, also traces the history of this unusual bird, as well as explaining how it gets its extraordinary pink colouring. These intriguing insights ensure the book is a wonderful resource for bird-lovers and animal enthusiasts alike.

Dr Kight, who is a behavioural ecologist, said: “One of the most amazing things about flamingos is that, despite how striking their plumage is, and how noticeable they are in their habitat, they are actually quite mysterious. It took researchers decades to collect even the most basic life history information about the birds, and we still have much to learn about this fascinating group. Unfortunately, the majority of flamingo species are quite vulnerable to human activities, so we’re racing to collect data that can be used to help conserve them.”

Although its distinctive colouring and one-legged stance make it possibly the most easily recognised bird in the world, many people are unaware that there are six different species of flamingo, each differing in size and hue.

Found across South America, Southern Europe, Africa, Asia and the Caribbean, these beguiling birds have played a significant role in world cultures throughout the history of mankind, from being thought of as a living representation of the god Ra in Ancient Egypt, to being depicted as a croquet mallet in Lewis Carroll’s seminal Alice’s Adventures in Wonderland.

Dr Kight added: “Until I began conducting research for the book, I had no idea just how many people are passionate about flamingos—not just the animals themselves, but any sort of paraphernalia shaped like, or featuring, the pink birds. I think it’s because flamingos are just so cheerful; their appeal is hard to resist. I should know—I now have my own growing collection of flamingo accoutrements!”

Dr Kight is based at the University of Exeter’s Penryn Campus in Cornwall. Having joined in 2009 as a visiting researcher, she became a postdoctoral research fellow in the Centre for Ecology and Conservation (2010-2012), and lectured in both the Biosciences and Geography departments (2012-2014). She is now Communications and Marketing Manager for the University’s Cornwall campuses.

Flamingo is published by Reaktion Books and is available on Amazon.