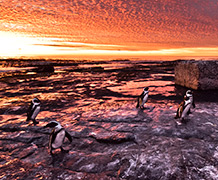 Survival of endangered African penguin chicks increased by 18% following a trial three-year fishery closure around Robben Island in South Africa, a new study from the University of Exeter has found.

The research does not suggest that fishing was the sole cause a decline of about 70% in penguin abundance in South Africa, nor that the experimental closure resulted in the breeding population at Robben Island increasing.

Large-scale changes in the marine environment have caused a change in the breeding grounds of adult sardine and anchovy. These fish now mostly breed further east than they did two decades ago and are out of reach of penguin colonies on South Africa’s West Coast for much of the year. This mismatch between breeding penguins and their prey has raised concerns that competition with small-pelagic fishing vessels around breeding colonies may be one of a number of factors contributing to the penguins’ decline.

The researchers note in the paper that it is the impact on adult survival of this changing prey availability that currently has the strongest impact on the numbers of penguins breeding at Robben Island. The benefit of the closure so far measured is not sufficient to offset the high adult mortality that has occurred in recent years.

The results, which are published in the Royal Society Journal Biology Letters, indicate that even small ‘no-take zones’ can dramatically improve the survival chances of endangered species.

The African penguin population is in freefall, with adult survival rates over the last decade desperately low. Although the ban on commercial fishing off Robben Island has boosted chick survival, the long term prospect for the species remains gloomy.

Dr Richard Sherley from the Environment and Sustainability Institute at the University of Exeter’s Penryn Campus said: “One of the major challenges of conserving a mobile species like the African penguin is that once they leave a protected area they are subject to outside pressures and dangers, including poor prey availability.

“Our study shows that small no-take zones can aid the survival of African penguin chicks, but ultimately commercial fishing controls must be combined with other management action if we are to reverse the dramatic decline of this charismatic species”.

African penguins feed on sardines and anchovies but fishing of these species off Cape Town is considered to have contributed to a 69% reduction in penguin numbers between 2001 and 2013.

The species’ worsening conservation status led to experimental fishing closures around four colonies between 2008 and 2014. These were earlier found to reduce penguin foraging effort but a beneficial impact on demographic parameters had not been demonstrated before this study and so the benefits of the closures have been the subject of much debate.

Although this study has shown that the fishery closure around Robben Island has improved chick survival, if the current  fishing pressure exerted on sardine in particular continues on the west coast there will still not be sufficient food to allow the penguin population to recover.

Seabirds will often respond to a scarcity of food by skipping or abandoning breeding, opting not to re-lay after losing clutches of eggs, or reducing the amount of food brought to the chicks leading to slow growth, poor chick condition and mortality through starvation. African penguins have shown all of these responses in recent years.

1501 nests were monitored at Robben Island between 2001 and 2013 to determine chick survival rates and a hydro-acoustic survey was carried out to estimate sardine and anchovy biomass.