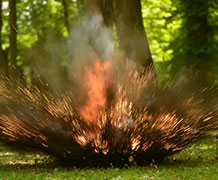 The device is being developed by scientists at the University of Exeter to detect damaging contaminants, such as TNT. Image courtesy of Shutterstock.

Cleaning-up post-war explosive chemicals could get cheaper and easier, using a new genetic ‘switch’ device, being developed by scientists at the University of Exeter to detect damaging contaminants, such as TNT.

“It's a bit like making mushroom soup made from dehydrated ingredients”, said Professor John Love, from Biosciences, who is leading the research.

"We take all the ingredients needed for gene activity, mix them together and transfer them onto paper to make a dipstick. When the mixture comes into contact with a contaminated water sample, it turns the genetic switch on which signals the presence of the pollutant”, he said.

When TNT is present, transcription, which is the first step of gene expression (in which a particular segment of DNA is copied into RNA) goes ahead, and the promoter is turned on.

In contrast to previous detection systems that rely on biological components, this is a cheaper cell-free system with a longer shelf life, which needs very little expertise to operate it. The method is also specific for each chemical, which means that the clean-up can be targeted.

Further research is needed before the system is ready for deployment.

"We are tinkering with the switches that turn genes on, because we want the detector to be sensitive to different levels of TNT," said Professor Love.

This will allow the detector to measure the concentration of pollutants as well as their presence.

The original idea for the project came from a student competition called iGEM. As part of this competition, undergraduate students developed a biosensor integrated into a bacterium (E. coli) that would detect TNT in the environment. The team at Exeter is hoping to develop the system further so that it will be able to detect not just TNT, but other contaminants too.

This work was presented by Dr Charlotte Cook from Biosciences at the annual meeting of the Society for Experimental Biology (SEB) in Prague on Thursday 2nd July 2015.