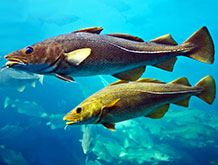 Historical data hold secrets of one of UK’s favourite fish

UK fisheries survey logbooks from the 1930s to 1950s have been digitised for the first time, revealing how cod responded to changing temperatures in the last century.

Scientists at the Centre for Environment, Fisheries and Aquaculture Science (Cefas) and the University of Exeter found that at the time, the warm seas experienced around Norway benefitted the cod, similar to the conditions there today.

Most cod eaten by the UK comes from northern seas including the Barents Sea around Norway, because the stocks there at the moment are at record highs. Cod stocks were also big in the middle of the last century, and this new research, published in PLOS ONE, reveals that the environmental conditions at the time contributed to the change. Cod diet data reveals that their food preferences each year, between capelin, herring, crustaceans and cod cannibalism, were also affected by their environment.

Cefas holds many records from historical survey cruises, many of them in the form of paper log books. A recent programme of work concentrated on cataloguing and digitising these documents, where possible, to ensure that they are not lost and can be made freely available. More of Cefas’ data, with the exception of data owned by industry, will continue to be made available over this year, as announced in June by the Environment Secretary, Elizabeth Truss.

The Barents Sea surveys were mainly carried out by the steam vessel RV Ernest Holt, which was commissioned especially to withstand Arctic conditions. These newly rescued data allow scientists to understand how fisheries in the region have responded to temperatures all the way from the 1930s to the present day.

The scientists at the time knew that the cod were being affected by their environmental conditions, but digitising this data has meant that much more modern techniques can be used to really delve into the responses of cod to changes in their environment and diet.

Cefas’ Marine Climate Change Scientist Bryony Townhill said: “Historical data such as this are so important in understanding climate change and variability. We know from anecdotal evidence that fisheries have varied in the past but it is rare to have such comprehensive datasets going back to the early 20th century. These logbooks, along with others still held by Cefas, reveal unique insights into the state of fish stocks and the environment in the past century, and enable us to put more recent changes into context.”

Dr Steve Simpson, Senior Lecturer in Marine Biology & Global Change at the University of Exeter said: “To predict how future climate change will affect crucial fish stocks, we can learn by looking back in time. This historic survey was conducted when Barents Sea was relatively warm and cod populations were booming. Painstaking efforts to convert scribbled notebooks into modern digitised data have provided new evidence on how warmer temperatures affect cod diet and cod populations."