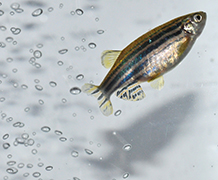 Zebrafish are native to India and Bangladesh but are used globally as a model in environmental research, developmental biology and medical research. Credit Kelvin Boot.

The impact of pollution on wildlife could be made dramatically worse by climate change according to a new study published today in the journal PNAS. Researchers from the University of Exeter's Streatham and Cornwall Campuses and AstraZeneca found that clotrimazole, a chemical that disrupts hormones and is commonly used in anti-fungal treatments, skewed sex-ratios in zebrafish in favour of males.

These effects were amplified when the experiment was conducted in warmer water temperatures predicted for the year 2100 given current rates of climate change.

Professor Charles Tyler, senior author from Biosciences at the University of Exeter said: “Chemicals in the environment are usually looked at in isolation but in reality animals are exposed to multiple stressful events at the same time. They include changes in temperature, food scarcity, or harmful chemicals. It is important that we understand how these pressures interact if we are to understand the real impact of rising global temperatures and increasing levels of pollution.”

Lead author Ross Brown, from the University of Exeter said: “Chemicals, including pharmaceuticals, bring a wide range of benefits to society.  Assuring their continued safe and sustainable use requires appropriate testing and assessment, taking into account future projections for the human population and the environment.  Climate change is a global phenomenon and in this study we have shown that rising temperatures could exacerbate the effects of certain chemicals in the environment, highlighting the need for appropriate assessments.”

The study was carried out with zebrafish in a controlled environment and included concentrations of clotrimazole that simulated the total loading of azole fungicides found polluting waterways.

Zebrafish are native to India and Bangladesh but are used globally as a model in environmental research, developmental biology and medical research.

Environmental pressures on wildlife are set to increase with predicted scenarios for climate change, human population growth, and economic development. Further work to understand the interactive effects of these pressures is crucial if their damaging effects on wildlife are to be avoided.

The paper ‘Climate change and pollution speed declines in zebrafish populations’ will be available during the week of March 2, 2015 in the PNAS online early edition: