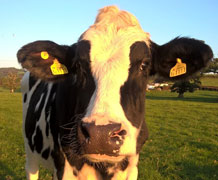 Intensive farming practices have been linked to higher risk of bovine TB.

Intensive farming practices such as larger herd size, maize growth, fewer hedgerows and the use of silage have been linked to higher risk of bovine TB, new research has concluded.

A study by the University of Exeter, funded by BBSRC and published in the Royal Society journal Biological Letters, analysed data from 503 farms which have suffered a TB breakdown alongside 808 control farms in areas of high TB risk.

Dr Fiona Mathews, Associate Professor in Mammalian Biology, who led the study, said: “TB is absolutely devastating for farming, and it’s essential that workable solutions are found. In the worst hit areas, farms are frequently affected over and over again with crippling consequences. If lower intensity production means better animal health, it offers a sustainable long-term strategy in high risk areas.”

The team found that farms with herds of 150 cattle or more were 50% more likely to suffer a bovine TB outbreak than those with herds of 50 or fewer. Patterns of crop production and feeding were also important, with the risks increasing with practices linked with higher productivity systems. For every 10 hectares of maize – a favourite food of the badgers that play a role in transmitting the disease – bTB risk increased by 20%. The feeding of silage was linked with a doubling of the risk in both dairy and beef systems. Landscape features such as deciduous woodland, marshes and hedgerows were also important. For example, on farms with 50km of field boundaries, each extra 1km of hedgerow was linked with a 37% reduction in risk. This is likely to be because there is less contamination of pasture by badger faeces and urine in hedgerow-rich areas. Marshland was associated with increased risk, possibly as a secondary effect of infection with liver fluke – a disease linked with wet environments and which interferes with the diagnosis of bTB in cattle.

Dr Mathews said: “To beat TB, we need to ensure our approach is robust and evidence-based. This is the first large-scale study to link a range of landscape-scale habitat features and farming practices with bTB. All of the effects we have found are additive, so changing several linked aspects of the farming system could potentially make a big difference. Farmers are already aware that biosecurity in the farmyard can help reduce the risk of bTB in cattle. We have now shown that wider environmental management is also important. By finding out more about these links, we hope that we can help eradicate this terrible disease.”