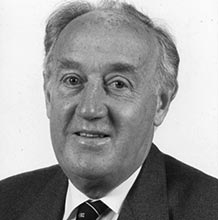 The distinguished mycologist and former Head of the Department of Biological Sciences at Exeter, Professor John Webster, died on 27 December 2014 at the age of 89.

Professor Webster was a world-renowned fungal biologist, who was twice President of the British Mycological Society (1969 and 1996) and organised the very first International Mycological Congress, which took place at Exeter in 1971.

Professor Webster joined the University of Exeter in 1969, when the Departments of Botany and Zoology merged to become a single Department of Biological Sciences to which he was appointed as founding Head of Department.  He led the Department until 1986 and is still fondly remembered by longstanding staff members. Professor Webster also established Exeter as a centre for fungal biology, building on the legacy of Professor Geoffrey Ainsworth.  A large number of leading mycologists trained at Exeter during this period including Lynne Boddy, Professor of Fungal Biology at Cardiff University; Nicholas Money, Professor at Miami University, Ohio, USA; Dr Alan Rayner from Bath University and many others who now teach and research around the world.

Professor Webster was a leading researcher who was particularly interested in aquatic fungi and studied aspects of their behaviour, including their ability to discharge spores over huge distances.  The ballistic, indeed explosive, release of spores into the air was captured by high speed video microscopy techniques, pioneered at Exeter in the 1980s and the physiological mechanism underpinning the release of spores, was worked out by Webster and his colleagues.

Professor Webster was, however arguably best known as the author of ‘Introduction to Fungi’, one of the definitive textbooks on fungi, which inspired students around the world.  The most recent edition of the textbook, co-authored with his former student Roland Weber, was published as recently as 2007, even though Professor Webster retired in 1990.  It continues to be used in many fungal biology degree courses to this day, along with a series of teaching articles on mycology that he authored in retirement.

Speaking about Professor Webster’s legacy and contribution, Deputy Vice-Chancellor, Professor Nick Talbot said “John Webster was an important figure in the history of the University of Exeter and greatly influenced many scientists, including myself. He was also an outstanding fungal biologist and internationally distinguished leader in the field of mycology and was instrumental in formation of the International Mycological Association, which held its first congress here in Exeter.  Importantly, John also believed passionately in public engagement in research and his fungal forays around Exeter were attended by literally hundreds of enthusiastic members of the public. He was both a natural historian of great talent and knowledge and a very engaging communicator of science.”