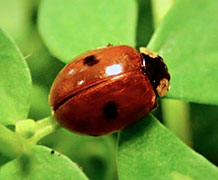 For one of Britain’s best-loved and colourful group of insects, ladybirds, their colour reveals the extent of their toxicity to predators, according to new research undertaken at the Universities of Exeter and Cambridge.

The study which is published today in the journal Scientific Reports, also found that the more conspicuous and colourful the ladybird species, the less likely it is to be attacked by birds.

Lina María Arenas, a PhD student at the Centre for Ecology and Conservation at the University of Exeter and from the University of Cambridge said: “Ladybird beetles are one of the most cherished and charismatic insects, being both beautifully coloured and a friend to every gardener. Our study shows that not only does ladybird colour reveal how toxic they are to predators, but also that birds understand the signals that the ladybirds are giving. Birds are less likely to attack more conspicuous ladybirds.”

Although red ladybirds with black spots are most familiar, ladybirds are a diverse group of species and come in many different colours and patterns, from yellow and orange to even camouflaged browns. The bright coloration of different ladybird species acts as a warning signal, telling potential predators to beware of the foul smelling, poisonous chemicals they use for defence.

The researchers measured toxicity using a biological assay, by counting the number of dead Daphnia - tiny crustaceans - in water containing the different ladybird toxins. The results show that five common ladybird species each have different levels of toxic defence. Those species with the most colourful and conspicuous colours against the natural vegetation where they live are also the most toxic.

Dr Martin Stevens from Biosciences at the University of Exeter said: “Our results tell us that the ladybirds present ‘honest’ signals to predators, because their colour reveals how well defended they are.

Modified cameras that are sensitive to ultraviolet light were used to photograph the ladybirds, allowing the researchers to use special modelling and image analysis techniques to analyse how each species would appear to predatory birds, which have very different colour vision to humans.

To test how likely each species was to be attacked, artificial versions of each ladybird species were presented to wild birds. The birds were able to recognise the differences in coloration between the prey, and were least likely to attack the brighter, more conspicuous ladybird species.

The study is the first to comprehensively show that the level of colourfulness and conspicuousness of different species with warning signals reveals how toxic they are, and that in turn more toxic and colourful species are less likely to be attacked in the wild.

The paper: Signal honesty and predation risk among a closely related group of aposematic species by Lina María Arenas, Dominic Walter and Martin Stevens is published in Scientific Reports.