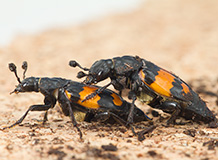 The research increases our understanding of the important process that helps organisms adapt to changes in their environment. Image courtesy Jena Johnson.

Love, love me do: male beetles that have more sex are more insecure, study shows

Males that mate more often are more insecure about their social status than those mating less, according to new research on the behaviour of burying beetles.

The study, published in the journal Evolution, provides new evidence that the social sensitivity of male behaviour is linked to how often male beetles mate.

Male burying beetles actively compete with each other for access to breeding resources such as dead mice, and when they find a suitable carcass will emit pheromones as a signal to attract females. But the emission of pheromones may also attract other males, leading to competition. Success in competition is determined by size: the larger you are compared to your rival, the more likely you will win out.

As a consequence, a dominant male and female pair, known as “resource holders” are usually established, who process the carcass and use it to raise their young. However, females and males who are not resource holders can adopt alternative reproductive tactics to increase the probability of their reproductive success. Subordinate females may lay eggs near the carcass and subordinate males adopt a “satellite” tactic, sneaking copulations with females. Females mating with multiple males creates uncertainty over paternity.

Dr Nick Royle, of the Centre for Ecology and Conservation at the University of Exeter, said: “What is really fascinating is that this social sensitivity has evolved in response to selection on mating behaviour: males that have more sex really are more insecure about their social status. Our results therefore provide valuable insights as to how behavioural plasticity evolves.”

As Dr Mauricio Carter explained: “Such flexibility of behaviour in response to a change in social context is a common, but relatively poorly understood, feature of organisms. Plasticity of behaviour is important because it allows organisms to respond rapidly to changes, increasing the persistence of populations in the face of environmental fluctuations. Our research increases our understanding of this important process that helps organisms adapt to changes in their environment.”