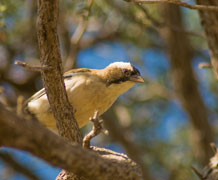 Getting help with baby care could keep families healthier and extend their lives, according to a new study into bird behaviour.

Research into weaver birds in South Africa, carried out at the University of Exeter and published in Proceedings of the Royal Society B, found that a heavy breeding workload led to increased free radical damage to cells, which can be associated with ageing and ill health. However, where birds were in larger groups and the workload was shared, no increase in cell damage was found.

The team studied cooperative white-browed sparrow weaver birds in the Kalahari Desert during their breeding season and compared groups of birds that were not breeding with others that were raising chicks.

In the three weeks after hatching, adult birds work feverishly to bring chicks food and as a result they grow to 40 times their original size. Meanwhile, non-breeding birds live a life of relative leisure, with no hungry mouths to feed.

“We investigated oxidative stress, which occurs when free-radicals cause damage to cells. Antioxidants usually prevent this damage, but during hard work, free-radicals can overwhelm antioxidant protection,” said lead researcher Dominic Cram, who is now based at the University of Cambridge.

“We found that the birds that were feeding nestlings often had weaker antioxidant defences and suffered from oxidative stress. However, in large groups where many birds assist with nesting care, the birds showed stronger antioxidants and lower free radical damage. So in larger groups many hands appear to have made light work.”

Dr Andrew Young from the Centre for Ecology and Conservation at the University of Exeter’s Penryn Campus in Cornwall, who leads this research programme, said that: “We have long known that helpers lighten the workloads of breeders in many cooperative species, such as ourselves, but the impact of this on health and ageing are largely unknown. Our findings provide exciting evidence of the potential for cooperation to reduce free radical damage, and so examining its later-life effects on patterns of ageing is now our primary focus of research.”

Oxidative stress is not something that only occurs in weaver birds, it has been implicated in over a hundred human diseases, including cancer and Alzheimer's disease.

The researchers say their results provide rare experimental evidence that reproduction can negatively impact both oxidative status and body mass in the wild. Furthermore, the findings suggest that these costs can be mitigated in cooperative societies by the presence of additional helpers.

“One can imagine similar processes at play in humans - if a couple had a baby and were getting help from one or two generous family members, then it would make life easier for the parents, a difference that might ultimately be reflected in their health and lifespan” added Dr Cram. “Of course, this would need further research, but the weaver birds of the Kalahari Desert have given us an insight into the way workloads and teamwork can affect health and ageing.”

The oxidative costs of reproduction are group-size dependent in a wild cooperative breeder by Dominic Cram, Jonathan Blount and Andrew Young is published in Proceedings of the Royal Society B.