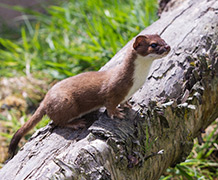 Extinct British genes have been preserved in the stoat population of New Zealand. Image courtesy of Shutterstock.

British stoats suffered a dramatic loss in genetic diversity in the 20th Century but extinct British genes were preserved in the stoat population of New Zealand, a new study has found.

The research reveals that stoats, which were introduced to New Zealand, have greater genetic diversity there, than in their native Britain. The results are unusual because introducing a species to a new area is usually associated with a loss in its genetic diversity.

The study, which was carried out by researchers at the Universities of Exeter, Auckland, Griffith and Canberra and at Landcare Research, New Zealand, is published in the journal Molecular Ecology.

The phenomenon is the result of a series of ill-fated attempts at biological control of pests. Populations of native stoats in Britain crashed when rabbits, their main prey, were decimated by myxomatosis. The Myxoma virus was introduced to Britain in the 1950s as a control measure for rabbits to protect grazing.

Meanwhile, in New Zealand, British stoats had been introduced in the late 1800s in a failed attempt at controlling rabbit numbers, which had reached plague proportions after they were themselves introduced for food and sport.

When stoats in Britain crashed, their ex-pat relatives in New Zealand conserved a reservoir of genetic diversity.

Professor Robbie McDonald from the Environment and Sustainability Institute at the University of Exeter’s Penryn Campus in Cornwall said:  “History has demonstrated that even well-intentioned introductions of species to non-native habitats are almost always a bad idea. That said, as a result of a series of misguided introductions, we have accidentally created an ‘invasive ark’ for genetic diversity in New Zealand.”

“It would be a fascinating, long-term experiment to return native genotypes back to Britain from New Zealand and see whether it re-established amongst its ancestors.” said Professor McDonald.

Professor Mick Clout from the University of Auckland said: “Invasive stoats pose a severe threat to native birds in New Zealand. The discovery that stoats here have higher genetic diversity than in their British homeland is intriguing. It raises the question of whether or not weasels, which were also introduced to New Zealand in a misguided attempt at rabbit control, may also have different patterns of genetic diversity in NZ than they do in the UK.”

The researchers investigated genetic diversity by analysing DNA from stoats in New Zealand and comparing the results to the DNA of stoats from across Britain and Europe.

The results showed that the introduced stoat population of New Zealand had greater genetic diversity indicating that several genetic types that had been lost from Britain had been conserved.

While there are a number of possible scenarios that could result in this distribution, historical accounts and the similarity in DNA between the two populations indicate the source population was clearly from Britain and the chances of independent genetic mutations occurring in New Zealand in the high frequencies observed are very low.

‘An invasive non-native mammal population conserves genetic diversity lost from its native range’ is published in the journal Molecular Ecology.