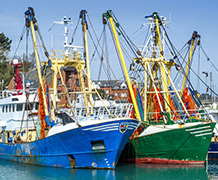 The study showed that a network of ‘limited-take zones’, in which trawling and dredging is allowed, would have far fewer benefits for wildlife and fisheries than a network of fully protected ‘no-take zones’. Image courtesy of Shutterstock.

Marine conservationists are increasingly pinning their hopes on marine protected areas (MPAs) to save threatened species and reduce over-fishing. However, while most people agree that stopping some types of fishing in MPAs would benefit wildlife and fisheries, working out which fishing activities should be banned is often complicated and controversial.

A new study published today in the Journal of Applied Ecology explores this difficult issue and highlights the benefits of fully protected ‘no-take zones’. This work focused on the English Channel and was carried out by researchers from the University of Exeter, the University of Kent’s Durrell Institute of Conservation and Ecology (DICE), the Centre for Environment, Fisheries & Aquaculture Science (Cefas), and the Institut français de recherche pour l'exploitation de la mer (Ifremer) in France.

The study showed that a network of ‘limited-take zones’, in which trawling and dredging is allowed, would have far fewer benefits for wildlife and fisheries than a network of fully protected ‘no-take zones’. However, the study also revealed that a compromise based on mixing no-take and limited-take zones could be an effective way forward, balancing political acceptability with long-term ecological and fisheries gains.

Lead author Dr Kristian Metcalfe from the Centre for Ecology and Conservation in Biosciences at the University of Exeter's Penryn Campus in Cornwall said: “There are always trade-offs when designing MPA networks. This is because while limited-take MPAs are generally less contentious with the fishing industry, their benefits are not as great or as far reaching as no-take MPAs”.

These findings have particular relevance for planning in English waters, where the UK government has been criticised for its plans to allow some types of fishing in every one of its new network of Marine Conservation Zones.

Co-author Dr Bob Smith from DICE said: “Fishing is allowed in a significant proportion of current and proposed MPAs in English waters. Our work shows that such an approach is very short-sighted and that there is plenty of scope for the government to increase the number of no-take zones”.

Co-author Dr Steve Mackinson from Cefas said: “People want to know whether the benefits of no-take zones justify the costs of their implementation, or whether there are other forms of management that could achieve similar results. Our work could inform future marine spatial planning efforts by identifying potential conflicts and so help people design systems that better balance conservation and economic objectives”.