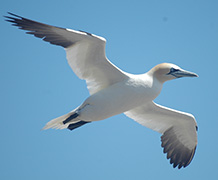 Offshore wind farms which are to be built in waters around the UK could pose a greater threat to protected populations of gannets than previously thought, according to a new study by researchers at the universities of Leeds, Exeter and Glasgow.

It was previously thought that gannets, which breed in the UK between April and September each year, generally flew well below the minimum height of 22 metres above sea level swept by the blades of offshore wind turbines.

However, while this is the case when the birds are simply commuting between their nest sites and distant feeding grounds, this new study shows that they fly at an average height of 27 metres above sea level when actively searching and diving for prey.

Crucially, the study also shows that the birds' feeding grounds overlap extensively with planned wind farm sites in the Firth of Forth, heightening their risk of colliding with turbine blades.

The researchers estimate that up to 12 times more gannets could be killed by turbines than current figures suggest, although they stress that the figure is based on calculations using current typical turbine sizes, which could be different to those actually installed, and that there is great uncertainty over actual turbine avoidance rates.

Previously data on gannet flight heights were obtained by one of two methods: trained surveyors on boats estimating heights by eye, or radar, which usually has a limited range of about 6km and is costly. The researchers conclude that more sophisticated methods of assessing risk should be adopted urgently.

Professor Keith Hamer, of the School of Biology at Leeds, oversaw the study, published today in the Journal of Applied Ecology. His research group, together with colleagues from Exeter and Glasgow, based their work at Bass Rock, the world’s largest colony of gannets with some 70,000 breeding pairs, situated in the Firth of Forth in south-east Scotland, less than 50 kilometres from several planned wind farm sites.

He said: “Our study highlights the shortfalls in current methods widely used to assess potential collision risks from offshore wind farms, and we recommend much greater use of loggers carried by birds to complement existing data from radar studies or observers at sea.”

Dr Ian Cleasby, from the Centre for Ecology and Conservation at the University of Exeter's Penryn Campus and lead author of the study, said: “Previous data had seriously underestimated the number of birds potentially at risk of colliding with turbine blades. There’s a lot of uncertainty over how many birds would actually be killed this way, but our predictions – if realised in the field – are high enough to cause concern over the potential long-term effects on population size.

“Our predictions suggest extra care be taken when designing and assessing new wind farms to reduce their impact on gannets.”

Co-author Dr Ewan Wakefield, of the University of Glasgow, said: “For the first time we’ve been able to track birds accurately in three dimensions as they fly from their nests through potential wind farm sites.

“Increasing the distance between the tips of the spinning turbine blades and the sea would give gannets more headroom – so we strongly urge that the current minimum permitted clearance turbine height be raised from 22m to 30m above sea level.”

Using miniaturised light-weight GPS loggers and barometric pressure loggers, temporarily taped the birds’ tails, the researchers tracked the flights of gannets in three-dimensions as they flew out from the Bass Rock, searching for fish.

They then used the data in a predictive model which suggested that, based on available estimates of the proportion of birds that would be likely to avoid the turbine blades, about 1,500 breeding birds could be killed each year at the two planned wind farms nearest to the Bass Rock.

The government expects offshore wind power could supply between eight and 10% of the UK’s annual electricity supply by 2020. It currently supplies about 4%, according to the latest official figures.*

The study was funded by the Natural Environment Research Council and the Department of Energy & Climate Change (DECC). A further, more extensive tagging study to improve understanding of gannet flight heights and behaviour has been funded by DECC in 2015. This work is being led by Professor Keith Hamer.