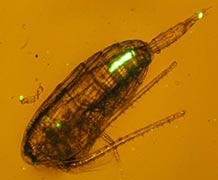 Copepods that consume microplastics produce smaller eggs that are less likely to hatch.

Plastic pollution threatens one of the ocean’s key inhabitants

Microscopic plastic pollution, which is present throughout the world’s seas, could affect the feeding habits of one of the ocean’s key inhabitants – the copepod; a tiny animal with a highly important role within marine food webs.

Novel research, carried out jointly between the University of Exeter and Plymouth Marine Laboratory (PML), recently published in the journal Environmental Science and Technology, has revealed that tiny bits of plastic, too small to be seen with the naked eye and referred to as ‘microplastics’, can interfere with the copepods’ ability to feed. This drop in feeding can affect how the animals reproduce and survive.

Copepods are one of the most common types of zooplankton - small animals that occur in vast numbers across the global ocean, with approximately 200 billion times more copepods on the planet than humans. These tiny creatures are a vital source of food and an important part of global marine ecology and the carbon cycle.

Lead researcher Dr Matthew Cole from Biosciences at the University of Exeter said, “Zooplankton, such as copepods, play a vital role in our oceans. These microscopic animals are close to the base of the marine food web and are an incredibly important source of food for a vast range of marine animals, including fish larvae and whales, as well as being key players in sustaining oceanic nutrient cycles. Changes in their health have a knock-on effect for animals higher up the food web.”

Microplastics have been found in oceans across the globe, from the equator to the poles, and from the sea surface to seafloor. Some, such as those used as exfoliates in cosmetics, are manufactured to be microscopic in size, while others derive from the breakdown of larger plastic waste.

“Previous studies have demonstrated that microplastics can be consumed by a range of zooplankton. Our results go on to show that microplastics can limit how much food is eaten by copepods”, Dr Cole explained. “This results in a decrease in energy and consequently the eggs produced by the animals tend to be smaller and less likely to hatch.”

The research team conclude that copepods are forced into using up their long-term energy reserves in response to consuming less food. These reserves are vitally important, as they provide energy for the copepods during the winter months when food is sparse, and they are also what make zooplankton of such high nutritional value to animals higher up the food chain.

It is hoped these key findings will help policymakers target marine areas of the greatest ecological concern for cleaning up our oceans.

The research was funded by the Natural Environment Research Council.