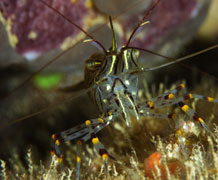 The researchers tested rock-pool prawns to find what factors influenced their tendency to innovate. Image courtesy of Shutterstock.

Prawns reveal the secrets of innovation

Small and hungry prawns are more likely to be resourceful in the face of adversity than their less desperate counterparts according to new research published today in the journal PLOS ONE. However the study found that size and hunger have different effects depending on whether the prawns are acting alone or in a group.

Small individuals were more likely to innovate when alone, but when in a group, size didn’t matter and it was the hungry prawns that tended to be most resourceful.

Dr Alex Thornton from the Centre for Ecology and Conservation at the University of Exeter’s Penryn Campus in Cornwall said: “Innovation can allow individuals, be they prawns or primates, to access new resources and cope when conditions change.

“Our study shows that the drivers of innovation are more complex than we previously thought. We found that not only is necessity a factor, but the context – either a single individual or a group – matters as well.”

The researchers tested rock-pool prawns to find what factors influenced their tendency to innovate. Rock-pool prawns are at the mercy of tides and waves, and often find themselves suddenly alone or in a group within the confines of a rock-pool. This extreme environmental variation, where physical and social conditions change dramatically from moment to moment, can drive prawns to innovate in an attempt to secure food or shelter.

To mimic these conditions the researchers tested the prawns’ spatial and manipulation skills as individuals and in groups in the lab.

In the spatial task, prawns had to take a roundabout route, detouring through a hole in a clear screen to gain access to food at the bottom of a tank. In the manipulation task, a transparent box blocked access to the food rewards and the prawns had to either turn the box over or laboriously reach through the tiny holes in the box to reach the food piece by piece.

When tested alone, small prawns were more than twice as likely to succeed in locating the food compared to their larger counterparts - and were faster to get there - but hunger had no effect.

When in a group, size had no effect and hunger was the driving factor leading individuals to innovate.

Previous studies have suggested that necessity is the mother of invention and individuals are driven to innovate when they are unable to find resources in other ways. These results indicate that not only can desperation lead to innovation, but that the factors that drive innovation in one context may not do so in another.

Innovation is essential for behavioural flexibility and potentially of vital importance to species that are forced to adjust to changes in their environments.

The study received support from the Biotechnology and Biological Sciences Research Council.