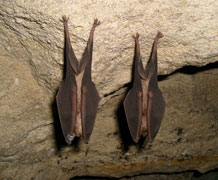 The Devon Greater Horseshoe Bat Project has received the grant via the Heritage Lottery Fund.

A project which is working to secure a future for one of Europe’s most endangered bat species has been awarded £707,000 of National Lottery funding.

The Devon Greater Horseshoe Bat Project, which has received the grant via the Heritage Lottery Fund (HLF), will now work for the next five years across the county to secure the long term future of one of the rarest animals in Northern Europe. The project is being led by the conservation charity Devon Wildlife Trust in a partnership involving 18 other organisations.

Dr Fiona Mathews, Associate Professor in Mammalian Biology from Biosciences at the University of Exeter is Director of Science for project.

The project’s manager is Ed Parr Ferris: “We’re delighted to have gained this generous support from the Heritage Lottery Fund. The greater horseshoe bat is a species that has seen its European population crash in the last 100 years, and has disappeared from more than half its British range. This has left them clinging on in just a few special landscapes. Devon supports the largest stronghold in Northern Europe. Our county still has a third of the 6,500 greater horseshoe bats that remain in the UK with the project focussing on 11 priority areas around key roost sites. It’s the job of our project to work with roost owners,  safeguard the surrounding countryside that acts as vital feeding grounds for the bats, and make people aware of the plight of this species.”

Greater horseshoes are one of the UK’s biggest bats with a wingspan of almost 40cm. They were once common across southern England but changes in land-use such as urban development  and a move away from cattle grazed pastures and hay meadows has led to their disappearance from much of the countryside.

The project will work alongside farming communities, providing advice and assistance to manage, restore and create the networks of habitats these impressive bats need, through its own grant scheme and government grants. Working with communities and schools, the project will also help put this species back on the map, enabling everyone to play their part in conserving a species Devon can rightly be proud of.

The project’s ultimate goal is to restore the landscapes that the bats need to travel through and feed in. Ed Parr Ferris said: “Cattle-grazed pastures, wildflower-rich meadows, hedges, woodland edges, orchards and streams all play a key part in the bat’s complex lives. They use these landscape features to navigate and travel safely and as hunting grounds to find their favourite prey: moths and beetles. The project will work with local farmers and communities to improve and conserve these features. This will be to the benefit not only of greater horseshoe bats but also Devon’s wealth of other wildlife and our treasured landscapes.”

Nerys Watts, Head of the Heritage Lottery Fund South West, said: “Sadly, bats are not known for being cute or cuddly but their importance to our ecosystem cannot be underestimated and their drastic decline in numbers across the UK demonstrates a very urgent need to protect them.  Thanks to money raised by National Lottery players, the partnership led by Devon Wildlife Trust can now run this important project in key sites across Devon to conserve and boost bat numbers for the benefit of everyone.”

Rt Hon Ben Bradshaw MP for Exeter said: “I'm extremely pleased this support has been awarded to this partnership. The Greater Horseshoe bat has suffered a terrible decline in numbers because of changes in farming practices over the last century or so, but Devon remains one of its strongholds. Work to stop and reverse its decline is extremely welcome.”

Ed Parr Ferris highlighted the importance of the local communities that the project hopes to inspire:

“We need the support of Devon’s communities to provide a secure future for Devon’s greater horseshoe bats. We need the communities that have these rare and wonderful animals in their midst to help us. That’s what makes this project so exciting. We are now looking for schools and community groups to come forward and become champions for their local bats - helping to improve bat habitats, taking part in bat detecting surveys, and promoting pride in their local greater horseshoe bats.”

Anyone living close to one of the 11 Devon greater horseshoe bat areas and who wishes to help should contact the project’s Community Engagement Officer, Helen Parr on 01392 279244 or by email on hparr@devonwildlifetrust.org. The Greater Horseshoe Bat Project has its own website www.devonbatproject.org where you can get lots more information including bat facts and video of the bats in their summer roosts. The project still needs to raise further funds to meet its targets for the next five years and welcomes any donations or support.