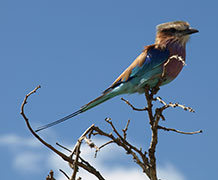 The lilac breasted roller, one of the species recorded in the study that is relatively rare in modified habitat, but very common in the nearby Kruger National Park. Image credit: Frank van Veen.

Scientists warn of species loss due to man-made landscapes

Researchers say farmland is a poor substitute for natural areas but simple improvements could make a difference to biodiversity conservation.

Research led by the University of Exeter has found a substantial reduction in bird species living in cultivated mango orchards compared to natural habitats in Southern Africa. The results, which are published in the journal Landscape Ecology, highlight the value of assessing habitats prior to land use change to predict the impact of agriculture on biodiversity.

The researchers monitored bird populations across cultivated mango orchards and natural habitats in the Kruger to Canyons Biosphere region in South Africa (http://www.kruger2canyons.org/). They found that replacing a natural habitat with an agricultural landscape can result in a substantial decline in the richness of species living within the region.

The scientists were aiming to ascertain whether agriculture could add novel habitat elements and thereby support additional bird species complementary to those already present in the natural areas – but found that in contrast, there was a loss of 35% of the bird species within the farmed land.

One of the study’s authors, Dr Frank Van Veen of the Centre for Ecology and Conservation at the University of Exeter's Penryn Campus, said: “Mango orchards are missing the low level woody scrub found in natural vegetation and the birds missing from the orchards are exactly those that have a life-style that depends on this layer of vegetation. These results show that simply measuring the vertical vegetation structure can help to predict negative effects of agriculture on biodiversity and suggest ways to mitigate these.”

“This loss of richness has implications for the preservation and provision of the ecosystem, in particular pest control, seed dispersal and pollination. It is thus crucial for policy makers in countries such as South Africa, where natural habitats remain the predominant landscape features, to identify management strategies that provide the best balance between crop productivity and biodiversity conservation in the context of sustainable agriculture.”

During the study, the team conducted 150 counts each at both natural habitat and mango orchard locations and measured aspects of habitat structure. Across all 300 survey points, a total of 14,278 birds representing 151 species were recorded. The results indicate that the lack of low level woody scrub in the mango orchards could account for the absence of some 26 insectivorous and nectarivorous species.

The diversity and abundance of bird species were both greater in natural habitats than in mango orchards, and whilst approximately a third of species recorded in the natural sites were unique to this habitat, there were no species unique to mango orchards.

Study author Yvette Ehlers Smith of the University of Exeter and The University of KwaZulu-Natal in South Africa added: “Our findings suggest that knowledge of habitat structure, along with species’ life history traits can provide a predictive framework for effects that anthropogenic habitats may have on regional biodiversity, and allow management to reduce negative effects.”

“The consequences of farmland management will have critical effects on conservation planning for biodiversity, as well as implications for food security. We recommend the inclusion of patches of natural vegetation, for example hedgerows, surrounding and within agricultural landscapes to increase habitat diversity and maintain natural levels of species richness.”