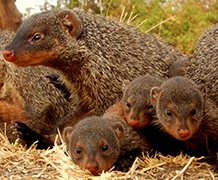 Selfishness lasts a lifetime, according to mongoose study

Researchers studying wild banded mongooses in Uganda have discovered that these small mammals have either cooperative or selfish personalities which last for their entire lifetime. The findings of the 15-year study are published today in the journal Animal Behaviour.

The researchers investigated the selfish behaviour of mongoose mate-guarding – where dominant males guard particular females – and the cooperative behaviour of ‘babysitting’ and ‘escorting’ the young.

They found that cooperative mongooses that helped out with offspring care did so consistently over their whole lifetime but those that put in little effort never increased their workload.

Similar consistent behaviour was found in mongooses that selfishly guarded mates for their entire life.

Dr Jennifer Sanderson, from the University of Exeter's Centre for Ecology and Conservation at the University's Penryn Campus, who observed the banded mongooses to understand how they choose to invest in cooperative and non-cooperative behaviours, said: “We all know people who are always cooperative and others who are always selfish. Our study has found that the same is true in banded mongooses, some mongooses are more often observed cooperating while others are more often observed investing in selfish behaviours.”

This type of ‘cooperative personality’ has been found in numerous other species including the banded mongoose’s close relative the meerkat. However, this NERC-funded study is the first to test if this difference in tendency to cooperate is associated with differences in how much individuals invest in trying to mate.

Banded mongooses are highly social and breed cooperatively meaning that all individuals assist in offspring care even if they do not breed themselves. However, there is also a lot of competition within the group, especially when males compete for access to receptive females during oestrus.

The research is part of a long-term study of banded mongooses on the Mweya Peninsular, Uganda led by Professor Michael Cant of the University of Exeter.

Professor Cant said: “Over the last 15 years we have observed how many days each male banded mongoose invests in two different cooperative pup care behaviours. We found that some banded mongooses have strong cooperative personalities and we wanted to find out why. In ant and honeybee societies there is a division of labour between the cooperative ‘workers’ and the selfish ‘queens’. We thought that the same might be true in mongooses – that their cooperative personalities might be because they are specialised to roles as helpers and breeders”.