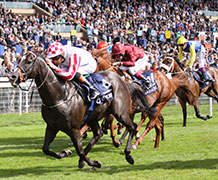 Study concludes that racehorses are getting faster

Despite a general consensus among scientists and in the racing industry that racehorse speed has plateaued, a new study from the University of Exeter has found that racehorses are getting quicker.

Further research is required to determine whether the increased speeds have a genetic basis or are the result of improved training, jockey tactics or other environmental factors.

It had appeared that racehorse speeds were not improving and previous studies concluded that thoroughbred racehorses may have reached the limits of their abilities. However these studies only analysed the winning time of a small number of middle and long distance elite races and did not take factors such as ground softness into account.

The researchers analysed a large data set of racing records that gave a detailed overview of thoroughbred performance at the elite level since the mid-1800s, and at both the elite level and in the racehorse population as a whole since 1997.

The full data set of 616,084 race times run by 70,388 horses shows that race winning speeds have improved greatly since 1850, and increases in speed have been greatest in shorter distance races. Data from 1997-2012 reveal that the improvements in performance are on-going, despite increases in handicap weight, and continue to be driven largely by increases in speeds of sprinters, especially at the elite level.

The slower rate of contemporary improvement in speed over middle and long distances could indicate that horses are reaching a performance limit at these distances or could suggest that breeders favour speed over endurance.

Patrick Sharman from the Centre for Ecology and Conservation at the University of Exeter’s Penryn Campus in Cornwall said: “There has been a general consensus over the last 30 years that horse speeds appeared to be stagnating. Our study shows that this is not the case and, by using a much larger dataset than previously analysed, we have revealed that horses have been getting faster. Interestingly, both the historical and current rate of improvement is greatest over sprint distances. The challenge now is to find out whether this pattern of improvement has a genetic basis”.

The researchers used data from British flat races run on the turf. The year of race, horse speed, timing method (hand-timed or automatic), race distance, racecourse, official going (ground softness), number of runners and name, age and sex of every horse were included in the analysis.

Further analyses are required to determine whether continued improvement in speed is underpinned by a genetically-based selection response and whether shifting selection strategies might explain these new findings.

Racehorses are getting faster by Patrick Sharman and Alastair J. Wilson is published in the Royal Society journal Biology Letters.