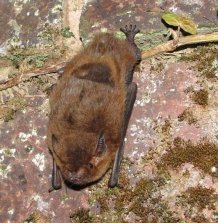 The One Show discovers the huge distances bats migrate

An academic from Biosciences has appeared on the BBCs One Show in a feature about the migration routes of bats.

Dr Fiona Mathews, Associate Professor of Mammalian Biology & Chair of The Mammal Society, joins presenter Miranda Krestovnikoff and bat recorder Daniel Hargreaves, to find out more about the migration patterns of the Nathusius Pipistrelle bat after the discovery of a bat in the Netherlands that had an identification tag from Somerset.

You can watch the feature from 18mins 30secs onwards via the BBC iPlayer. The programme will be available online until the end of October.