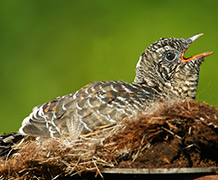 The people of Devon are being urged to get involved in the second phase of a project which is trying to map the movements of cuckoos across the county, but in particular on Dartmoor.

The team of researchers would like the public to make a note of any cuckoos they hear or see, together with any additional comments or observations, and share that information via an online form with the research team.

The cuckoo has shown sharp declines in recent decades, figures suggest up to 70% in the last 20 years. This research hopes to identify possible strongholds for the species, and therefore inform conservation measures, by building up a good understanding of the current local distributions of cuckoos.  Dartmoor is still a stronghold for the species, but the team would like to have a better understanding of which specific areas within Dartmoor are used by cuckoos, and in which other Devon locations the cuckoo is still found.

Professor Charles Tyler from Biosciences at the University of Exeter said: “Most people know the sound of the cuckoo, but perhaps not that that it spends such a short period of time with us in Devon each year – as little as 10 weeks, and for the sole purpose to breed.   It winters in the rainforests of the Congo in Africa and it is arriving back with us now, in April. . This is the ideal time of year to hear or spot them. We had a great response from the public last year with 728 sightings and we are hoping for even more this year. We especially need records from the more remote locations away from roads.”

The project is being run jointly by the University of Exeter, Devon Birds and Dartmoor National Park

To record sightings and soundings people should visit http://www.devonbirds.org/birdwatching/recording/cuckoos . All information on local cuckoos is valuable to the research but because cuckoos are declining much faster in Lowland areas, the team are particularly keen to hear about cuckoo soundings or sightings outside Dartmoor. They are also keen to find out where cuckoos might be breeding.