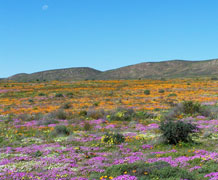 A “window on the tree of life” created by a team which includes a University of Exeter researcher is helping to explain the worldwide variation in plant life-histories.

University of Exeter ecologist Dave Hodgson works with other academics to manage a plant database called COMPADRE that brings together demographic information about plant species. This database has been used to show plant life can be summarised into two variables: how fast the plant grows and its reproductive strategy.

Until now the reason for the enormous variation in the life history of plants was poorly understood, even though it is fundamental to the understanding of the evolution, abundance and distribution of species.

The study was carried out by Dr Hodgson, colleagues from Max Planck Institute for Demographic Research and the Universities of Queensland, Trinity College Dublin, Southern Denmark, Radboud, Plymouth and Wageningen.

They used the demographic data from COMPADRE for 418 plant species from all four corners of the globe to examine plant life histories.

Their study, Fast-slow continuum and reproductive strategies structure plant life history variation worldwide is published in Proceedings of the National Academy of Sciences of the United States of America. It shows around half of the variation in plant life-history is caused by whether the examined plant species grows fast and is short-lived, or slow-growing and long-living, and if it is highly or poorly reproductive.

The lifespans of mammals, birds and reptiles are influenced by similar patterns, suggesting these variables explain how life is organised on Earth. Understanding these patterns could help to predict population persistence, extinction and diversification.

The COMPADRE Plant Matrix Database was created to determine which attributes may predict the risk of local extinction of endangered species and the potential for invasion of alien species.

Dr Hodgson, Associate Professor of Ecology based at the University’s Penryn campus in Cornwall, said: “We are in a new age of ecological research, when information from all over the world can be brought together into databases. International teams of collaborative scientists can then seek patterns, and test general hypotheses, that would be impossible using single studies of individual species.

“In this research we find that variation in plant life histories cannot be captured using a single continuum. Instead we find that plants vary not just in their pace of life, but also in their reproductive output and frequency of reproduction. This helps us to understand invasive species, and endangered plants. The COMPADRE database is an incredible resource for further study of plant demography and ecology.”

Dr Roberto Salguero-Gómez, from the University of Queensland, Australia, said: “We found that life history strategies of these 418 plant species – very different species from all over the world – can be explained by an axis representing the ‘pace of life’ and another representing their wide range of reproductive strategies.