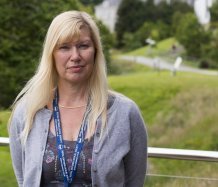 Professor Nina Wedell has been elected President of the European Society for Evolutionary Biology (ESEB) by its membership, and will serve as President Elect 2015-2017, President 2017-2019, and Past President 2019-2020.

Nina Wedell is a Professor of Evolutionary Biology and interested in the evolutionary ecology of sex, in particular the role of selfish genetic elements in sexual selection and sexual conflict. Her current research explores the potency of selfish genes in shaping the reproductive biology, mating system and even the sex of their host and the ramifications of this for sex differences and viability of populations, particularly in insects.

ESEB is an academic society that brings together over 1700 evolutionary biologists from Europe and the rest of the world - researchers, academic teachers, students, as well as journalists and other persons interested in evolution, and publishes the Journal of Evolutionary Biology.

Professor Wedell enthusiastically promotes women in science, and is keen to advance the idea of applying evolutionary biology to current environmental and health problems and hopes that ESEB will have a role to play in informing funding agencies and the wider society of the impact potential of this approach.

‘It is a great honor to be entrusted by the ESEB membership to be the next President of the society. I feel really thrilled and excited about the prospect of working for ESEB to promote evolutionary biology in Europe and beyond’.

Professor Wedell is a Royal Society Wolfson Research Award Holder, and her research is also funded by NERC and the Royal Society. She currently serves as the Director of Research for the College of Life & Environmental Sciences at the Cornwall Campus, is also the President of the International Society for Behavioral Ecology, and a member of EMBO.