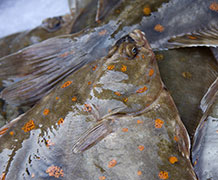 The study suggests we will see proportionally less of some of the species we eat most of as they struggle to cope with warming conditions. Image courtesy Shutterstock.com

Popular North Sea fish such as haddock, plaice and lemon sole could become less common on our menus because they will be constrained to preferred habitat as seas warm, according to a study published today in Nature Climate Change.

Fish distributions are limited by water temperature and some species can only thrive in certain habitats and depths. In the last 40 years the North Sea has warmed four times faster than the global average and further warming is predicted over the coming century, leading fisheries scientists to study how this will impact on commercial species.

The researchers developed a model that combined long-term fisheries datasets and climate model projections from the Met Office to predict the abundance and distribution of the UK’s favourite fish over the next 50 years.

The team including researchers from Exeter and Bristol found that, as the North Sea warms, species will have little capacity to move northwards to avoid warming temperatures, since habitat of a suitable depth is not available. Due to higher temperatures, many of the species studied are predicted to reduce in relative abundance.

Louise Rutterford, postgraduate researcher in Biosciences at the University of Exeter, said: “Our study suggests that we will see proportionally less of some of the species we eat most of as they struggle to cope with warming conditions in the North Sea. We provide new insight into how important local depths and associated habitats are to these commercial species. It’s something that is not always captured in existing models that predict future fish distributions.”

Dr Martin Genner, Senior Lecturer in Fish Ecology and Evolution at the University of Bristol, said: "Long-term standardised fisheries surveys from many European countries, alongside leading climate models for the region, mean it is a unique region to develop and test new modeling approaches.” He added: “The modeling technique used in this analysis performed remarkably well when tested on available long-term datasets. This provides real confidence in the model’s ability to predict future patterns of fish distributions around the UK.”

Dr Steve Simpson, Senior Lecturer in Marine Biology & Global Change at the University of Exeter, said the findings are important for both consumers and the fishing industry: "We will see a real changing of the guard in the next few decades. Our models predict cold water species will be squeezed out, with warmer water fish likely to take their place. For sustainable UK fisheries, we need to move on from haddock & chips and look to Southern Europe for our gastronomic inspiration.”