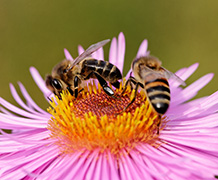 Commercial species of bee can pass on viruses to wild pollinators. Image courtesy of Shutterstock.

Wild pollinators at risk from diseased commercial species of bee

A new study from the University of Exeter has found that viruses carried by commercial bees can jump to wild pollinator populations with potentially devastating effects. The researchers are calling for new measures to be introduced that will prevent the introduction of diseased pollinators into natural environments.

Commercial species of honey bee and bumble bee are typically used to pollinate crops such as tomatoes, sweet peppers and oilseed rape. Fast evolving viruses carried by these managed populations have the potential to decimate wild pollinator species, including bees, hoverflies and butterflies, placing biodiversity and food security at risk.

The global value of insect pollinators has been estimated to be around €153 billion per annum. Commercial pollination services are provided predominantly by honeybees and bumblebees, but wild pollinators play an important role pollinating crops as well as native plants. Pollinators have suffered declines and extinctions in recent years as a result of habitat destruction, with pesticide use and infectious diseases playing a potentially increasing role.

Dr Lena Wilfert from the Centre for Ecology and Conservation in Biosciences at the University of Exeter’s Penryn Campus in Cornwall said: “Our study highlights the importance of preventing the release of diseased commercial pollinators into the wild. The diseases carried by commercial species affect a wide range of wild pollinators but their spread can be avoided by improved monitoring and management practices.

The researchers reviewed existing studies to determine the potential for disease emergence within wild pollinator communities based on known honey bee viruses.

The main culprit of disease-related losses from commercial honeybee colonies is the Varroa mite. This parasite helps spread viral diseases and may increase their virulence. One of these viruses - the Deformed Wing Virus - has recently been identified as an emerging disease in pollinators and its prevalence in commercial honeybees has been linked to its existence in wild bumblebees.

The social behaviour of honeybees, bumblebees and social wasps, provides perfect conditions for disease transmission both within the colony and between different species.

The risk of disease transmission can be further increased through poor management of commercial species including international transportation of bees without appropriate checks, intensive breeding, poor pathogen screening, and the release of commercial bees into the environment to interact freely with wild pollinators. Future work will investigate which commercial species is driving disease transmission. The researchers will also monitor the effectiveness of existing conservation schemes to determine their success in protecting wild pollinator populations.

The study was funded by the Royal Society and the Natural Environment Research Council and was published in the Journal of Applied Ecology.