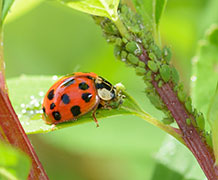 When the consequences are dire it is important for the aphid to commit to a lifestyle, whether it is to run away or to stay put. Image courtesy of Shutterstock.

You can be a coward or a fighter. Just pick one and stick with it, says study

When the chips are down, having a strong personality may be the difference between thriving and failing, according to new research which studied how aphids reacted when faced with predatory ladybirds.

The study conducted by the University of Exeter and the University of Osnabrueck, and published in the Journal of Animal Ecology, suggests that committing to a consistent behavioural type in times of crisis results in the best overall outcome in terms of fitness and reproductive success.

The researchers conducted experiments with red and green pea aphids in tanks, where they monitored differences in escape response upon a ladybird attack. When faced with a predator, the aphids either employ a risk-averse strategy of dropping from the plant and running away, or a risk-prone strategy of hunkering down and staying put.

These simulated attacks – in which the ladybirds were ultimately prevented from eating the aphids – were repeated to see if the aphids changed their behaviour or were committed to a chosen lifestyle.  They found that those aphids which displayed consistent behaviour (either always dropping or never dropping) did better than those which did a bit of both.

Author Dr Sasha Dall from the Centre for Ecology & Conservation in Biosciences at the University of Exeter's Penryn Campus in Cornwall said: “When faced with a predator, some aphids are consistently brave, some are not and some don’t display any personality. We found that when the consequences are dire it is important for the aphid to commit to a lifestyle, whether it is to run away or to stay put. When life is easier, however, it matters less whether the aphids have strong personalities or not.”

The researchers found that because red aphids are more conspicuous than green, life is harsher and so the consequences of dropping vs not dropping are more extreme.

Lead author Wiebke Schuett, now at the University of Hamburg, explained: “For red aphids it was particularly important to either commit to a ‘live fast die young’ lifestyle ignoring the increased threat from predators, or to always run away when threatened in order to forage more and live longer. Both decisions resulted in strong pay offs, but only if the aphids remained consistent.”

This work was funded by a Research Grant to Wiebke Schuett, Sasha Dall and Till Eggers from The Association for the Study of Animal Behaviour (UK).