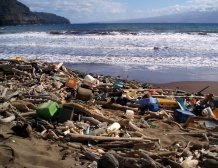 Researchers from the University of Exeter and Plymouth Marine Laboratory have studied the findings from beach litter surveys carried out over a ten year period by volunteers for the Marine Conservation Society’s Beachwatch programme.

They found that some types of litter increased significantly over the period, and recommend that urgent action should be taken to tackle them.

Data for 2.4 million items of litter collected through over 73,000 volunteer hours during the period 2005-14 were studied. To define statistically significant trends in litter levels, the researchers took into account variations in numbers of people taking part in surveys, the amount of time spent carrying out each survey, and differences in the lengths of beaches covered by volunteers.

They found that, while overall quantities of litter recorded by volunteers showed no statistically significant change over the decade, several types of litter had increased. These include small plastic fragments, plastic food packaging, wet wipes, polystyrene foam, balloons and large fishing nets.

The majority of material was identified as being of land-based origin, mainly from public littering.

Sarah Nelms, a PhD researcher from Plymouth Marine Laboratory and University of Exeter, said: “Our finding that the majority of beach litter originates from the public is very concerning and indicates a need for better education on the consequences of dropping rubbish. Clean seas and beaches are hugely important for the environment and the economy as well as our own health and well-being.”

Laura Foster, Head of Pollution at the Marine Conservation Society said: "This independent study has clearly identified a rise in several litter items, such as food and drink waste and wet wipes found on British beaches. MCS is seeking to address these sources of litter by running targeted campaigns to establish bottle deposit schemes, and to raise awareness with the public and retailers that ‘Wet Wipes Turn Nasty’. Governments, through developing litter strategies, can be better informed by studies such as these to put effective measures together to reduce litter."

The researchers concluded that organised citizen-science programmes such as Beachwatch, which define a sampling methodology and record effort, provide a valid and effective means of monitoring marine litter. They also provide a highly cost-effective method of collecting data on a large scale and engaging citizens in an issue that affects us all.

The research is published in Science of the Total Environment.