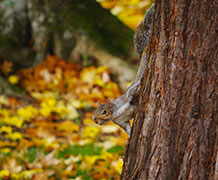 Invasions from alien species such as grey squirrels threaten economies and livelihoods.

Invasions from alien species such as Japanese Knotweed and grey squirrels threaten the economies and livelihoods of residents of some of the world’s poorest nations, new University of Exeter research shows.

The damage caused by non-native species like the Harlequin ladybird and mink, threaten global biodiversity and cost global economies US$1.4 trillion annually. They can transmit disease, choke river systems and wells, prevent cattle being able to graze and out-compete or eat native species.

This is often seen as a “first world” problem. Experts have now shown these invasions are also threatening the last remaining biodiversity strongholds in the world’s most fragile economies. One sixth of the global land surface is highly vulnerable to invasion, including substantial areas in developing nations and areas with diverse species of birds and plants.

A new study says better action is needed to protect people and the environment in areas with high levels of poverty.

Increasing globalization, especially imports of pets and plants, has caused much of the biological invasions in the past. In the future air travel will be responsible for biological invasions of Africa and Asia. This will be exacerbated by climate change, and intensifying agriculture, which make it easier for invasive species to become established.

Rich nations are accustomed to the nuisance of invasive alien species, and are increasingly taking protective action. The study outlines how poorer economies are crucially reliant on international trade and have little power to regulate imports, so the introduction of highly dangerous species continues unchecked.

Researchers have evaluated the global 21st century threat from invasive species, and have found many developing nations are not capable of responding properly. They hope their findings will lead to governments and NGOs improving schemes to warn communities of the threats of biological invasion and provide solutions.

Dr Regan Early, who lead the study, said: “Rampant globalisation will lead to invasions in countries with the least capability to deal with them. We need more international cooperation, and the US, Australia and nations in Europe to share expertise.”

Study co-author Ines Ibañez of the University of Michigan, said: “In the coming years, the negative impacts associated with the introduction of harmful species will likely be exacerbated by other global stressors, such as climate change, landscape degradation and pollution.

“Developed and developing countries—especially the latter—may lack the operational infrastructure to prevent and deal with harmful introductions.”

Purdue University's Jeffrey Dukes, who also co-authored the study, said that dramatic changes in trade, transport and the environment pose challenges to native species that have evolved over thousands of years to be well adapted to their ecosystems.

"We're rapidly shifting the ground under native species," he said. "While species can presumably evolve to be better adapted to new conditions, we don't know how long that could take."

The researchers collected information about trade, particularly plants and pets and air travel and compared this to information about climate change, wildlife and agriculture to model where invasions are likely to be identified.

Biological invasions in the developing world so far have included the recent influx of Diamondback moths, panama disease, which wiped out banana plantations in central and south America, and prickly pear, which devastated grassland in Africa, leading to cattle being malnourished and people losing their livelihoods. A new strain of panama disease currently threatens the global banana market. It can take more than a decade for an invasion to take hold.

Global threats from invasive species in the 21st Century and national response capacities is published in the journal Nature Communications.