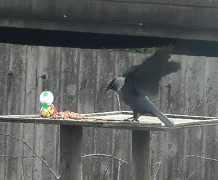 Urban birds are less afraid of litter than their country cousins.

Urban birds are less afraid of litter than their country cousins according to a new study co-authored by a University of Exeter academic.

The research, which highlights one way in which birds adjust to urban settings and is published in the journal Animal Behaviour, shows that corvids - the family of birds which includes crows, ravens and magpies - are more likely to show fear in relation to unfamiliar objects than other birds.

However, if they and other bird species have previously encountered similar objects they are able to overcome some of their fear.

Dr Alex Thornton, Senior Lecturer in the Centre for Ecology and Conservation at the University of Exeter’s Penryn campus, his PhD student Alison Greggor and fellow researchers measured levels of fear of new objects in birds across urban and rural habitats, comparing corvids, birds of the crow family, which are known to be behaviourally flexible and innovative, with other bird species found in urban areas.

Their responses to different types of objects were recorded and the birds' hesitancy to approach food when different types of objects were nearby was compared to their behaviour when food was presented alone. Corvids were more neophobic, or afraid of new objects, than other birds, but all birds were less fearful if the objects involved were similar to something they may have encountered before, for instance, urban birds were less hesitant in approaching litter.

Dr Thornton said: “As humans alter habitats around the world, animals’ responses to novelty can dictate whether they perish or thrive. We found that corvids are particularly fearful of novelty but they, and other birds seem to alter their responses to take advantage of new opportunities. In urban areas, where litter containing tasty tit-bits is all-too common, they seem to treat litter as relatively safe to explore, whereas their counterparts in the country find it rather more frightening.”

Lead author and Gates Cambridge Scholar Alison Greggor, who is doing a PhD in Psychology based at the University of Cambridge, said: "From a broad perspective this work aims to help us understand how animals adapt to human-dominated landscapes. We found that although species differ in their overall levels of fear towards new things, populations of all the bird species we tested in urban areas showed lesser fear towards objects that looked like rubbish, but did not show reductions in fear towards all types of novelty.

“Therefore, even though urban animals may appear less wary overall, they may actually be learning which parts of urban habitats are safe and which are dangerous. In the future, others might be able to use this information to predict what types of things animals need to learn to be able to survive in urban areas. Such predictions may help us understand why some species are unable to adjust to urban areas."