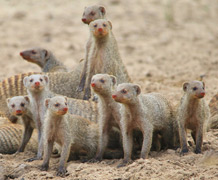 Banded mongooses are small mammals that live in extended family groups of around 20 individuals. Image courtesy of Shutterstock

Competition between mothers starts in the womb, new study suggests

Female mammals, including humans, may try to outcompete one another by producing bigger babies, ground-breaking research conducted by scientists at the University of Exeter has suggested.

A 13-year-long study published in the journal Scientific Reports, the first of its kind to use ultrasound, found that female mongooses respond to reproductive competition by producing bigger pups.

The results highlight the subtle ways that females compete over reproduction, and add to growing evidence that social mammals, including humans, might influence conditions in the womb to maximise their reproductive success.

Competition over who has most surviving offspring is the driving force of evolution. Males have showy contests and may fight each other with weaponry such as antlers, but in many social animals females also compete over opportunities to reproduce.

“Medical and evolutionary biologists have suggested that mothers might prime their offspring during pregnancy to help them face competition after birth, but evidence for this idea remains controversial. This study provides evidence that in wild mammals, competition among mothers starts even before birth,” said Emma Inzani, an MRes student and the lead author of the study.

Banded mongooses are small mammals that live in extended family groups of around 20 individuals. All adult females breed during the season, and give birth on the same day to a large litter of pups who compete for food and care from the rest of the group. Synchronous birth means that mothers can’t recognise their own young in the communal litter, and so are unable to help them in competition with other offspring. Instead, mothers respond to competition by channelling more resources to their developing offspring in the womb.

“Our study is the first to use ultrasound scans to look at prenatal investment in a wild mammal, and supports the idea that mothers adjust prenatal investment in the face of competition,” added Inzani. “We don’t know whether the mongooses are eating more, or might be using their stored body fat and thus trading off their current investment with future prospects.”

The team of researchers studied 11 wild groups of banded mongooses living in Queen Elizabeth National Park, Uganda, over a period of 13 years. They measured the size of individual foetuses from ultrasound images to measure how much each female invested in the current pregnancy.

The results were striking: the more females that competed to breed at the same time, the larger the foetuses that each female produced. The increase in foetus size was most pronounced for females of low weight, and when rainfall was low – two factors that increase the intensity of competition among the communal litter.

Surprisingly, this extra investment during pregnancy did not translate into improved pup survival or growth. Dr Emma Vitikainen, senior author on the research paper suggests this might reflect a type of ‘Red Queen’ effect, where everyone has to ‘run in order to stay still’. This means that even though there is no apparent advantage from producing larger offspring, all females need to invest more to break even in competition.

“We did find that mothers who produced the largest foetuses showed higher survival in the months after breeding, suggesting that better quality females can afford to produce larger foetuses with no consequence to their survival,” Dr Vitikainen said.

The Banded Mongoose Research Project is led by Professor Michael Cant and Dr Emma Vitikainen from the University of Exeter. The study is published by Nature Scientific Reports, and funded by the European Research Council (ERC).