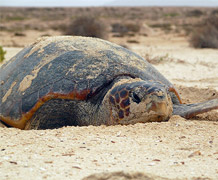 An illegal trade in marine turtles is continuing despite legislation and conservation awareness campaigns, a pioneering study has shown.

The study, conducted by researchers from the University of Exeter in the Cape Verde islands, 500 km off the West Coast of Africa, and one of the world’s leading nesting sites for the protected loggerhead species, found that the biological impact of the trade has been previously underestimated and that turtles are still being harvested and consumed.

The authors suggest that conservation interventions need to be refined and reassessed and believe the study’s findings will provide valuable knowledge about human behaviour and socio-economic influences for informing national policy-makers.

They recommend focusing both on suppliers and consumers for more robust solutions given that enforcement alone is not likely to protect turtle populations in the region.

Joana Hancock, lead author of the study which is published in the journal Oryx, conducted the research as part of her as part of her MSc in Conservation Biology with colleagues based at the Centre for Ecology and Conservation at Penryn Campus and the Turtle Foundation.

The study reports that whilst the existence of laws to protect marine turtles was perceived by survey respondents as a key deterrent to harvesting, environmental awareness campaigns and lack of availability were perceived as main reasons for decrease in turtle consumption.

Joana, who is now a PhD student at the University of Lisbon, said: “Reducing illegal harvesting in Cape Verde has been a major conservation challenge in the region, as the third largest loggerhead sea turtle aggregation in the world nests in Cape Verde, facing huge pressure from hunting. Several strategies have been used to eradicate this problem, with limited impact. We hope that this study sheds some light in aspects that may have been previously overlooked when designing conservation actions and may have positive outcomes in the future.”

Co-author Dr Ana Nuno, a Research Fellow from the University of Exeter, said: “This study demonstrates the need to better understand social aspects of natural resource use and provides particularly relevant insights to inform ongoing decisions about regulations in Cape Verde. It’s a fantastic opportunity to use our research to address issues of conservation concern being discussed by decision-makers.”

Professor Brendan Godley, who supervised the project, said: “The global importance of the turtles of Cape Verde has been clearly demonstrated. Key among the threats they face is this potentially unsustainable take at the nesting beaches. This study highlights a range of areas for conservation action."

The publication of this study coincides with an international workshop organized by MAVA Foundation in Cape Verde, between the 16th and 18th of May, which aims at developing the action plan to eradicate disturbance and illegal harvesting on the four most important nesting sites for green and loggerhead sea turtles in West Africa. The event will gather the main actors involved in sea turtle conservation in Cape Verde and Guinea-Bissau, together with other key stakeholders from the region and beyond.

Exploring drivers and deterrents of the illegal consumption and trade of marine turtle products in Cape Verde and implications for conservation planning by Joana M. Hancock, Safiro Furtado, Sonia Merino, Brendan J. Godley and Ana Nuno is published in Oryx.