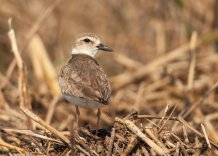 Research has suggested that females have stayed without ornamentation because of a greater need for camouflage. Image courtesy of Shutterstock

A new explanation for why female animals are usually less colourful and decorated than their male counterparts has been suggested by scientists from the University of Exeter – it could be to avoid sexual harassment.

In many species males attract the sexual attention of females with distinctive plumage, markings or displays of some type. But males can also be choosy about their mates, so the lack of ornamental sexual traits in females remains puzzling.

In a paper published in Animal Behaviour, Professors David Hosken and Nina Wedell from the Centre for Ecology & Conservation at the University of Exeter’s Cornwall Campus, and Professor Suzanne Alonzo, a colleague from the University of California, Santa Cruz, suggest females could be avoiding ornamentation to protect themselves from unwelcome male attention.

Previous research has suggested that females have stayed without ornamentation because of a greater need for camouflage or because increased ornamentation would affect fecundity. In this paper the researchers are proposing a new explanation.

"If we accept the premise that males, while not as choosy as females, still exert some choice of mate then the question is why don’t females signal their sexual quality via ornamental sexual traits like males do?" said Professor Hosken. "We suggest that if female ornaments signalled their sexual quality, females could suffer increased sexual harassment by males and this could be especially costly to fitness."

It is known that females go to great lengths to avoid male sexual harassment and signal their unattractiveness – by disguising themselves as males, moving to areas where there are fewer males, using anti-aphrodisiacs and fighting off unwanted copulation.

"We are not suggesting that male harassment of attractive females is the only explanation for lack of sexual ornamentation in females but want to alert researchers to the idea that this could be a contributing factor," added Professor Hosken.