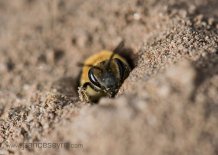 From English beavers to burrowing bees, NatureWatch is back

An English beaver and her young steal the spotlight in the latest captivating episode of NatureWatch, released today.

NatureWatch, a student-led wildlife documentary showcasing the natural world of Cornwall, returns for a second season, with the first episode released on the evening of Tuesday, 6th December.

The episode sees the new presentation team of Ellie Stockwell, Ben Porter and Billy Heaney take centre stage for the first time, following their introduction at the end of the season one finale in September.

For the latest episode, the team stick close to home and take a look at a whole host of different migratory birds found at the University of Exeter’s Penryn Campus.

In an effort to monitor survival rates and collect vital information about these birds’ movements, the team assisted with careful capturing and ringing. The data they collected contributed to the ever-growing British Trust for Ornithology national ringing database.

Ben Porter, presenter and second year Conservation Biology and Ecology student said: “It was great being able to collect data on such a fantastic selection of birds on campus – it just goes to show how lucky we are at Penryn Campus with a superb diversity of habitats.

“I’ve been a big fan of NatureWatch since starting university and so I can’t wait to get more involved as a presenter and showcase the diversity of wildlife we have here in Cornwall.”

From the birds to the bees, the NatureWatch team then went on a successful mission to uncover an elusive and seemingly unseasonal burrowing Ivy bee.

This colonising species feeds on pollen produced by ivy and so emerges much later in the year than most bees, in the autumn.

Saving the best until last, the team then head to the River Otter in Devon to find out more about the first wild beavers in England since the 1500s. They were lucky enough to catch sight of a female beaver with five kittens, emerging from their lodge, producing some stunning footage.

A few weeks ago, the beaver was officially relisted as a native species in Scotland. While this is not the case yet in England, the team discuss the possible full recolonisation of these dam-building rodents in the West Country.

Celine Gamble, MSc Biodiversity and Conservation and NatureWatch producer said: “It has been absolutely fantastic to see the new NatureWatch team work so well together to produce the first episode of our exciting new wildlife packed series.

“The team have come a long way since our first episode that we released back in June 2015, and there is certainly lots more to come!”

NatureWatch is run by student societies EcoSoc and WildDocSoc, along with the College of Life and Environmental Studies. Each episode is filmed, produced and presented by students from both the University of Exeter and Falmouth University.

A free to attend premier of the latest episode will be held on Tuesday 6 December at 4:30pm at The Upper Stannary, Penryn Campus, Cornwall. Following this, it will be available to watch online.