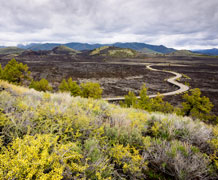 The team believe that mankind can provide crucial assistance to species across the globe by manipulating the nearby region to suit the needs of the local wildlife. Image courtesy of Shutterstock

The harmful effects of climate change on wildlife habitats can been counteracted by localised land management, a new research paper has suggested.

Scientists from the University of Exeter have suggested that habitats could be controlled through various focused practices to help ‘buffer’ species against the worst effects of continued climate change.

The research team, based at the Environment and Sustainability Institute (ESI) at the University’s Penryn Campus in Cornwall, acknowledge that some species can adapt to changing conditions to meet new challenges, such as moving to cooler habitats as temperatures rise.

However, the team believe that mankind can provide crucial assistance to species across the globe by manipulating the nearby region to suit the needs of the local wildlife.

The review paper features in the respected scientific publication, the Journal of Applied Ecology.

Owen Greenwood, a Bioscientist at the University of Exeter and lead author of the paper said: “We know that climate change has a huge impact on biodiversity, and one aspect is that many species are unable to migrate to less hostile habitats due to unfavourable conditions, such as farmlands providing a barrier for example.

“What we have shown in this paper is that, by managing the land in a smarter way, we can help species adapt and survive despite the problems associated with climate change. And these are all things that can be done on a local level, and so could be acted upon in a relatively short space of time.”

The team considered the effects of climate change across the globe, and how it affected the local wildlife.

They suggest that localised landscape management can be used to offset the adverse impacts on biodiversity to changes in temperature, water availability and sea-level rise.

Some of the techniques suggested include altering the topography of a local area, as manipulating vegetation structure can alter the temperature and moisture conditions to allow organisms to thrive.

Dr Ilya Maclean, a lecturer in Natural Environment at the University of Exeter and a co-author on the paper added: “Habitat for wildlife is becoming increasingly fragmented and isolated. Because of this, many species find it difficult to keep pace with climate change. They struggle to move between isolated habitat patches to reach cooler regions. Now, more than ever, we need to find ways of protecting wildlife from climate change within their existing habitats, which is what we set out to do.

The review paper, Using in situ management to conserve biodiversity under climate change by Ilya Maclean, Owen Greenwood, Andrew Suggitt and Robin Curtis from the University of Exeter, and Hannah Mossman from Manchester Metropolitan University, is published in the Journal of Applied Ecology.