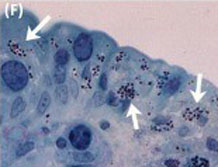 Intestinal biopsy from a patient with gastrointestinal microsporidiosis and diarrhea due to Encephalitozoon intestinalis (Image taken from Figure 1 of published review).

An international consortium of scientists including researchers from the Centre for Environment, Fisheries and Aquaculture Sciences (CEFAS) and Dr. Bryony Williams from the University of Exeter have published a new review uncovering the direct impacts and drivers of microsporidian disease infecting a diverse range of animal taxa.

These researchers were brought together at a meeting in Vancouver sponsored by the Organisation for Economic Co-operation and Development (OECD) to discuss the threat thatthese pathogens pose to global health, food security and the economy.

The authors highlight the impact of microsporidian parasites across all stages of the food chain: from plants, to animals and humans. Disease affects both aquatic and terrestrial habitats, emerging as epizootic infections across animal taxa from spore transmission in food and water supplies. Through contact with infected animals and the environment, these pathogens are transmitted to humans causing severe disease in all organs, particularly the gut. The parasite Enterocytozoon bieneusi is of particular concern, with greater than 200 genotypes identified from water sources. It commonly affects the gastrointestinal tracts of HIV/ AIDS patients, leading to chronic diarrhoea. Its tiny spores, with dimensions of only a single micrometer, have spread across a diverse range of mammal and bird species. This pathogen can also spread to respiratory and renal sites, posing a severe threat to human health.

Microsporidia are single-celled, eukaryotic spore-forming parasites closely related to fungi. They infect hosts via a penetrating polar tube emerging from their spores that directly pierces host cells allowing entry and replication. They are opportunistic pathogens, causing infection in immune compromised humans, and are classified in three major groups according to their host and environmental ranges. They occur as both generalist and specialist parasites, described by their broad or narrow host range respectively.

Microsporidian infections are most often found in those suffering from malnutrition and severe underlying disease, as well as chemotherapy and transplant patients. Importantly, infections are now being driven by intensification of food production and climate change, which threaten to enhance the efficiency of parasite transmission.

Microsporidian parasites now pose major global challenges to our future health, food security and economy. Microsporidiosis due to impairments to immune functioning in an ageing population will become increasingly prevalent, as 16% of the global population are predicted to be aged over 65 by 2050. The ability of the parasites to enter the global food chain is a real threat for future health and food security. An outbreak of E. bieneusi in cucumbers in Sweden previously caused gastrointestinal disease in more than 100 people. Infection of invertebrates used in pest control for crop production, or of pollinators presents a major barrier to providing sufficient nutrition to feed a growing global population. In addition, pollination services and hive products from the common honeybee have an annual global value of greater than $200 billion.

Dr. Bryony Williams commented "microsporidia are a hugely diverse group of parasites infecting a vast range of animals but often do not cause symptoms in their hosts. However when host health is impaired, perhaps by stress, immunosuppression or co-infection with another pathogen, microsporidian infections can have serious effects. Given the opportunistic nature of microsporidia it is very important that we better understand their diversity and distribution across the earth so that we can identify emerging threats to human health and to food security."

Many challenges lie ahead to tackle the severe global threat of microsporidian disease. The government has set out a ‘One Health’ agenda to apply molecular and ecological tools to better understand the biology and track the spread of microsporidian parasites. Future legislation will impose stricter barriers on global food trade and travel to reduce the threat of imported parasites.

This review was published as an output from an Organisation for Economic Cooperation and Development (OECD) symposium entitled: ‘Microsporidia in the Animal to Human Food Chain: An International Symposium To Address Chronic Epizootic Disease’.