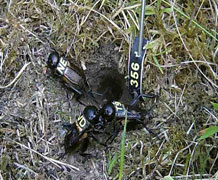 Mating with a large number of partners may not be as good an indicator of success as it appears, new research has shown.

Instead, males that mate with multiple partners may actually experience a reduction in paternity rates, due to sperm competition, as their partners will also mate with many other males.

The innovative research project was carried out by scientists from the University of Exeter’s Penryn Campus, in Cornwall.

The team, from the Centre for Ecology and Conservation, used video cameras to study both competition among male field crickets (Gryllus campestris) and their mating habits in the wild.

The scientists were able to study both pre and post-copulation competition amongst the cricket males, within a complex “social network”, to provide new insights into how sexual competition plays out in the wild.

David Fisher from the Centre for Ecology and Conservation at the University of Exeter’s Penryn Campus in Cornwall said: “The pattern we found suggests that males that mate more often may actually lose paternity through sperm competition. It might seem more logical to think that more sexual encounters would lead to a higher number of offspring, but this isn’t necessarily the case – in fact, especially strong sperm competition would mean the opposite.”

The Exeter researchers have tagged and filmed wild crickets in northern Spain and observed sexual competition every Spring since 2006.

Findings include that both male and female wild crickets seek out multiple partners, and males compete with each other before and after a sexual encounter.

However, the team also discovered that the males are unlikely to specialise in competition pre-or post-copulation, as they cannot monopolise access to females.

David added: “We know that competition for mates has the potential to have an influence on evolution, with females preferring certain mates and dominant individuals monopolising access to females. However, this research gives a new insight into understand not only how the male-female relationships work, but also how different types of competition between males relate to each other.”