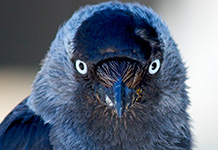 Jackdaws will only follow others to eat in dangerous places during breeding season.

Birds copy one another when trying new foods but will take more risks when doing so at different times of year, scientists at the University of Exeter have found.

The research found that wild jackdaws will only follow others to eat in dangerous places during breeding season, providing useful information to biologists as humans encroach increasingly on the birds’ natural habitats.

The study, published in the journal Scientific Reports, was conducted at the Cornish Jackdaw Project, a major field site for the study of avian behaviour and cognition, led by Dr Alex Thornton, a Senior Lecturer at the University of Exeter’s Penryn Campus in Cornwall.

Researchers tested how often wild, individually marked jackdaws were influenced by social cues to consume novel, palatable foods and to approach a startling object across both non-breeding and breeding seasons.

They found that in both seasons jackdaws were more likely to consume novel foods after seeing another jackdaw do so. In contrast, jackdaws only copied others in eating near the object during breeding season, suggesting that, despite the potential value of social information, jackdaws did not follow social cues consistently. Instead, whether risk taking was contagious depended on the type of information and the time of year.

Alison Greggor, a PhD student who led the research, said the findings provide information about how birds learn to discriminate the beneficial from the dangerous: "Wild animals increasingly encounter man-made food and objects. We intuitively expect animals to approach certain combinations of food and objects, such as crisps in a shiny packet on the pavement, but we equally expect them to avoid other combinations, like reflective crop deterrents in a field. How they react to these different types of novelty is crucial to their survival, but we know little about how animals learn to discriminate beneficial from dangerous novelty in the wild."

The researchers, who included Dr Thornton and Dr Guill McIvor of the University of Exeter, and Professor Nicola Clayton of the University of Cambridge, wanted to investigate how social learning might allow jackdaws to capitalise on the risk-taking of others. Like other birds in the crow family, jackdaws often rely on human-produced food, but are also persecuted because of their perceived conflict with humans. The researchers thought social learning might be particularly important in allowing them to survive alongside humans.

Alison added: "This is the first time such biases have been found in the wild, and suggests that social influences could shape how jackdaws exploit man-made foods year round. Meanwhile they may be more likely to learn socially about man-made objects at certain times of year."

Dr Thornton said: “We have known for a long time that animals can learn from one another, but this study shows that jackdaws use this social information selectively, depending on the context and time of year. Research into how animals acquire useful information will be vital if we want to understand and predict how they will respond to the changes humans are causing to their natural environments.”