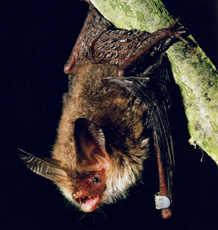 The University of Exeter experts studied data collected across Europe and concluded that roads present “a real and growing danger” to protected bat populations. The research, funded by the Natural Environment Research Council (NERC), concluded bats were often reluctant to cross roads, disrupting their ability to reach feeding and roosting areas. The group also identified more than 1,000 bat fatalities caused by collisions with cars.

Dr Fiona Mathews, Associate Professor of Mammalian Biology at the University of Exeter, said: “There has already been concern about roads severing the commuting routes of bats. Our research has now shown that road fatalities are also an important issue, particularly when rarer species such as barbastelle and horseshoe bats are affected.

“Because bats and their habitat are now highly protected throughout Europe, we might think that there is no cause for concern and there has been widespread media interest in the public money spent on ‘bat bridges’ and acoustic surveys for bats. Unfortunately these measures are often more of a box-ticking exercise than a means of offering real protection. We know from our research that bat casualties are extremely difficult to find on roads because of their small size: the true collision rate will therefore be at least an order of magnitude larger than that actually observed."

Interestingly, the study found that male bats were considerably more likely to be killed in collisions than females. Dr Mathews, who is who is also chair of The Mammal Society said: “The males may be forced into less favourable habitats near roads, as females tend to stick together in breeding grounds in prime habitat. ”

The study, the first of its kind, has just been published in the prestigious academic journal Mammal Review.

Amy Fensome, a PhD student within Professor Mathew's research group, said that the findings are particularly pertinent given the rate of new road building planned for the UK. “The UK Government currently has plans in the pipeline to spend more than £15 billion on new roads, including more than 400 miles of new motorway and road-widening schemes,” she said. “Across Europe as a whole, an average of 70,000 km [43,500 miles] of new roads are built every year.”

Dr Mathews said her research indicates that there is “no cause for complacency” in terms of the protection offered to bats in the UK and Europe. “We need a lot more consistent research on the real effects of road-building on bat populations. It is not enough to spend a lot of money on bat surveys if they are not carried out scientifically and consistently. We need to know a lot more about how roads affect bats. For example, tree lined minor roads posed less of a barrier to the movement of bats, but also increased the risk of collision with vehicles. Closed tree canopies might therefore encourage the bats to fly higher and remain safely out of the path of oncoming traffic. For major roads, wide green bridges and underpasses at points previously identified as commuting routes may be required."

Roads and Bats, a meta-analysis and review of the evidence on vehicle collisions and barrier effects by Amy Grace Fensome and Fiona Mathews, published in Mammal Review May 29 2016